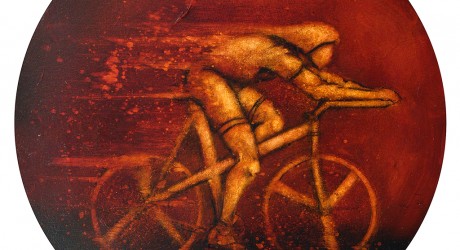 FRANK To, the young Glasgow-based artist with a growing international reputation as a leading contemporary figurative painter, will exhibit ‘The Collision of Eras’, a diptych featuring legendary Scottish cyclists Sir Chris Hoy and Graeme Obree, at this year’s Edinburgh Art Fair.

Speaking about the inspiration behind the painting, To, who conducted detailed research into the mechanics of cycling and cycled extensively himself in preparation for the work, said: “The construction of the Sir Chris Hoy Velodrome for the XX Commonwealth Games in Glasgow 2014 is itself an inspirational example of regeneration and testament to how, with sufficient self-belief, talent and dedication, an individual can achieve his dreams.

“Sir Chris Hoy was himself inspired by the pioneering Flying Scotsman Graeme Obree, whose revolutionary bike was built during the last recession.

Celebrating its seventh successive year, the Edinburgh Art Fair has grown in stature to become one of the most respected and anticipated events of its type.

Attracting galleries from as far afield as Canada, Czech Republic and Ireland and showing artists from all four corners of the globe, the international feel of the event continues again in 2011.

In addition to ‘The Collision of Eras’, on sale at the Edinburgh Art Fair for £2200, To will be showing ‘Little Red Riding Hood’; ‘The Armless Maiden’ and ‘The Cat Witch’, three paintings from his most recent Shadowlines exhibition featuring a series of paintings inspired by fairytales.

The Edinburgh Art Fair takes place at the Edinburgh Corn Exchange and is open to the public from Friday 18th to Sunday 20th November.