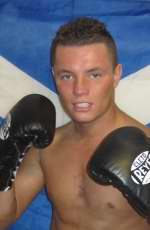 Young Scottish professional boxer John “Boy” McCallum completed a 20 mile run on 6 November in aid of Help for Heroes, the charity formed to help those who have been wounded in Britain's current conflicts.

Running alongside his trainer and former Commonweath Games bronze medalist Colin McNeil at Bathgate Sports Centre in West Lothian, John took the event in his stride.  He's currently in training for his next fight on 9 December.

John commented: “I was thrilled to be asked by my nutrition sponsor Experience Exercise to run in aid of Help for Heroes.  It's a fantastic charity that does great work for those who really deserve it, and a privilege for me to be asked to take part.”