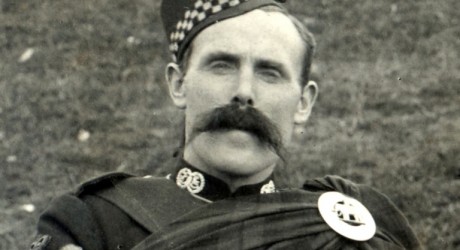 EVIDENCE of a ‘golden age’ of moustache wearing has been discovered in the photographic archives of one of Scotland’s National Collections.

From the tonsorial elegance of Victorian shooting parties, to the hand-brushed, stiff upper lips of Edwardian country gentlemen, the images reveal the popular moustachery of a bygone era.

They’ve been found in the archives of the Royal Commission on the Ancient and Historical Monuments of Scotland (RCAHMS) and were taken at a time when facial hair had its heyday.

Now RCAHMS have joined forces with ‘Movember’, the charity which aims to raise money and awareness about men’s health (specifically prostate and testicular cancer) by encouraging men to find sponsors and grow a moustache for the 30 days of November.

They hope that the images will inspire modern gentlemen in the art of growing, grooming and wearing a moustache with style. Individual photographs of 19th and early 20th century moustache fashion discovered in the RCAHMS archives include:

* Tweed-clad and pipe-smoking masters and guests at the now demolished St Fort Country House in Fife, pictured in 1895;

* A group of Scottish soldiers in full regalia pictured in 1907;

* A Victorian shooting party of gentlemen hunters, ghillies and beaters pictured on the banks of Loch Lomond in 1894;

* A team of curlers posing with brushes, stones and a trophy on an icy loch-side near Stanley in Perthshire, in 1889;

* Quoiting players in Fife posing for a team photo in 1893;

* A group outing of immaculately-dressed staff from the Glassford Street, Glasgow branch of the Bank of Scotland pictured in 1890; and

* The gentleman cyclist S R Turnbull posing with his bike on the banks of Loch Long in 1904.

Inspired by the archive photography, seven members of staff at RCAHMS are growing their own moustaches as they take part in Movember 2011.

Alasdair Burns, RCAHMS publications and graphics officer, said: “One hundred years ago, men really knew how to cultivate and look after their facial hair. Moustaches were symbols of pride, authority and status. No self respecting Victorian or Edwardian stiff upper lip was complete without one.

“Our archive photographs are a window on a world of lost moustaches, and I’ve identified a few key styles I’d like to emulate. Movember is a fun way to raise awareness of serious issues about men’s health, and the RCAHMS ‘Mo Bros’ are delighted to be involved.”

To follow the progress of the RCAHMS moustache growers visit their page here http://uk.movember.com/mospace/1682884/

The Mo Rules: for the entire month of Movember, each Mo Bro must grow and groom a moustache according to these rules:

To view the image gallery of ‘Scotland’s Lost Moustaches’, and to take inspiration for your own Mo, go to www.rcahms.gov.uk/scotlandslostmoustaches

For further information and images or for interview requests please contact Giselle Dye at Pagoda PR on 0131 556 0770 or email giselle.dye@pagodapr.com mobile 07739 085023

1. RCAHMS is the National Collection of materials on Scotland’s built environment that connects people to places across time. It is the first port of call for information about the built environment of Scotland, from prehistory to the present day, and records the changing landscape and cultural heritage of Scotland and collects materials relating to it.

2. Within RCAHMS National Collection, there are thousands of historical photographs from the Victorian and Edwardian eras. Dating from the 1850s onwards, they have been collected to illustrate Scotland’s people and places through the years. The varied holdings include substantial collections of glass plate negatives and prints by significant photographers, as well as private family photograph albums.

3. www.movember.com Movember is the month formerly known as November, where men and women across the globe join together to raise awareness and funds for men’s health issues – specifically prostate and testicular cancer. Since its humble beginnings in Melbourne Australia in 2003, Movember has grown to become a global movement.

4. Last year, 111,825 people took part across the UK raising £11.7 million. These efforts have funded programmes run directly by Movember and their men’s health partners The Prostate Cancer Charity and the Institute of Cancer Research.

MEDIA RELEASE posted by Pogada PR. You too can post media releases (aka press releases) on allmediascotland.com. For more information, email here.