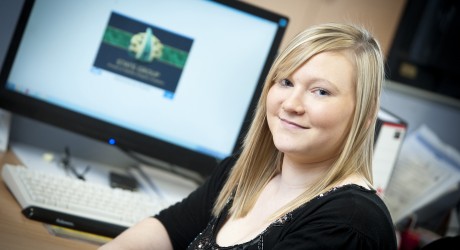 ADMINISTRATION worker, Moira Cook, is flying the flag for the North-east as the only finalist from the region in the Scottish Modern Apprenticeship Awards.

Moira is one of three finalists in the Service Apprentice of the Year category and will learn if she has been successful at a glittering awards dinner at the Glasgow Science Centre next month. (Dec 7)

The 19 year-old office junior joined Kintore-based specialist engineering company STATS Group on leaving Kemnay Academy and has become a valued member of the administration team at the Kintore-based company.

As part of her career progression Moira undertook an apprenticeship in Business and Administration and it’s her hard work and progression under the Modern Apprenticeship scheme which has led to the nomination.

Her role involves supporting the machining, fabrication and engineering teams who design, build and test STATS’ range of isolation tools and plugs which are deployed on major oil and gas pipeline projects in the North Sea and globally.

Demand for STATS products are services are at an all time high and the company has won a number of major international contracts, but Moira thrives on the pressure and welcomes the new challenges which come with working within an up-tempo organisation.

She said: “It can be very hectic at times but the experience of working in a busy environment against tight deadlines motivates me to push myself harder and to prove myself against older colleagues.

“STATS is a can-do company and if you show you can do it, they give you every encouragement to learn new skills and take advantage of opportunities such as the Scottish Modern Apprentice awards.

“When I first came to STATS Group I was quite nervous and quiet but as I have gone through my Apprenticeship it has really boosted my confidence and helped me to grow in to my job. My colleagues are very friendly and there is always someone willing to give advice or point you in the right direction and I have appreciated their support.”

STATS Group director, Lorraine Porter, said: “Moira is a great example of how a young school leaver can quickly make a significant contribution to the running of a business.

“Our ethos is to offer all staff the training and educational opportunities which allows them to do their job to the best of their abilities and fulfil individual potential. We are delighted Moira’s hard work has been recognised and reaching the Apprenticeship finals is an achievement in itself.”

STATS Group is a specialist engineering company and service provider that operates predominantly in the arena of piping and pipeline integrity and maintenance. We supply a comprehensive range of products and services, which enable piping and pipeline isolation, intervention, inspection, repair, connection, and testing work scopes.

Established in 1998, our key drivers of providing innovation, value and rapid response, has cemented our reputation in the UK-North Sea and other oil producing regions for always exceeding client expectations. Every product in the STATS portfolio is designed, manufactured, assembled and tested by our own in-house engineers and technicians.

Issued on behalf of STATS Group Ltd by Sure Public Relations. For further information please contact Stephen Rafferty on +44 (0)7980 598764 or email moreinfo@surepr.co.uk.

MEDIA RELEASE posted by Sure PR. You too can post a media release (aka press release) on allmediascotland.com. For more information, email here.