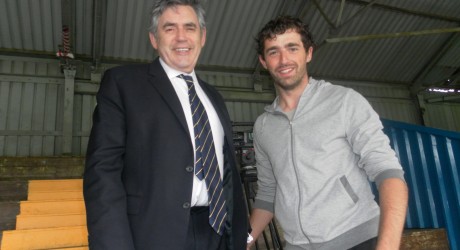 FORMER Prime Minister, Gordon Brown,  talks of family stories and his affinity with Cowdenbeath Football Club in a documentary called When The Sun Shines, created by University of Stirling student, Ross Cunningham.

The emotive film focuses on Central Park, Cowdenbeath’s stadium, and relates it to the memories and bonds that come with being a devoted football fan.

The MP is amongst several interviewees who discuss their personal ties with the stadium and how Central Park links to their past. The film also carries the theme that a football ground is viewed by many of its fans as a place of worship.

Despite being a Raith Rovers fan, Gordon Brown, whose constituency covers Cowdenbeath, says the ground has played a special part in his life as his father and grandfather were both avid fans. The MP was also there in 2006 to present the club with their first trophy in 67 years when they won the Third Division.

Ross (25), from Glenrothes, said the former Prime Minister went “out of his way” to take part in the film. He said: “It was a privilege to interview him as a year before he had been the leader of the country. He is someone I have seen on television many times, so it was a bit surreal him agreeing to be in my film.

“It was a great experience and Gordon was really down to earth and enthusiastic. He was very at home talking about the ground and what it means to his family. The future of the stadium is uncertain and Gordon feels that the most important thing is that for fans the heart of the club remains.”

Gordon Brown said: “I was very pleased to be able to take part in Ross’s film. I think it’s very much to Ross’s credit that he chose this topic for his film and I would like to wish him much success in the future.

“Cowdenbeath Football Club has a long and proud tradition in the town and in the hearts of its fans, amongst whom were my father and grandfather. I have been MP for Cowdenbeath since 1983 and it was an especially proud moment for me in 2006 to be able to present the Club with the trophy for becoming Third Division Champions.”

The making of the film was an emotional experience for Ross as another of the interviewees, his 84-year-old grandfather Ross Birrell, describes how the stadium links him to the memory of his son who died 11 years ago.

Ross’s uncle Ashley, also a devoted Blue Brazil fan, had his ashes scattered on the park and the filming was the first time his grandad had returned to the stadium.

The first viewing of the documentary moved his grandparents to tears.

“They were sad to relive my uncle’s death but also happy that their son will be forever immortalised in a film about the football club that he loved,” said Ross. “At the end of the film it is my uncle’s scarf that is blowing in the wind.

“I tied it to a part of the terracing at the spot where he used to stand when watching Cowdenbeath play.”

Ross will graduate with a Masters in Film Studies on Friday 25 November during a ceremony at Stirling Albert Halls. The 25 year-old has set up his own video production company and has praised the education he received at Stirling.

He said: “Stirling is a wonderful environment to learn in. The staff were very encouraging. I couldn’t imagine getting a better experience anywhere else. My degree has given me the qualifications and skills I need to run my own business.”

Ross’s film can be viewed on You Tube ‘Blue Brazil’ or visit http://www.youtube.com/watch?v=TUifUrFWTmE

More than 700 students will attend graduation ceremonies in the Albert Halls, Stirling on 25 November when honorary degrees will also be awarded to architect Robert Steedman OBE and environmental history Professor Donald Worster.

MEDIA RELEASE posted by the University of Stirling. You too can post media releases on www.allmediascotland. For more information, email here. And do feel free to follow www.twitter.com/allEducationPR.