Media Release: Happy families with awards at the double for ‘Curry King’, Charan Gill, and daughter 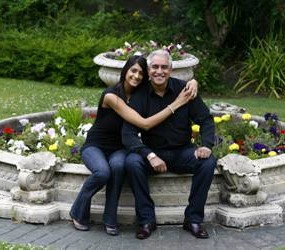 IT’S a case of happy families in one enterprising household today as ‘Curry King’, Charan Gill, was presented with a lifetime achievement award at last night’s the Scottish Asian Business Awards while his daughter, Preet Sandhu, won the coveted Businesswoman of the Year category in recognition of her achievement in the growth of her residential letting and property management company, Happy Lets.

The win caps a significant year of expansion for Happy Lets, which recently acquired Surehome Property, a former competitor for an undisclosed sum.

Commenting on her win, Ms Sandhu said: “I’m very happy to win this prestigious award, which recognises the tremendous progress our firm has made over the course of this year.

“I believe the success of our business is largely due to the amazing work ethic of our staff, who really are the backbone of any successful business.

“As ARLA licensed agents, we are committed to providing a high quality service to landlords and tenants alike and this belief forms the core of our company mission.

“We are pleased to be working with institutions, including banks, property agents and receivers to help them add value to portfolios that they may have inherited and we find that area of work rewarding.

“Happy Lets continues to be growth orientated and we are very much focused on expanding further throughout 2012 whilst maintaining, if not exceeding, the professional service our clients have become accustomed to.”

Preet, together with husband Bobby, won the Scottish Young Entrepreneurs’ Award two years ago, and together they now manage a property portfolio worth over £90 million.

The Happy Lets brand was launched two years ago when the firm expanded with the acquisition of The Letting Store in Hamilton, followed swiftly by the relocation of that office into a bigger and more prominent site.

These two offices became the twin foundations upon which the enterprising couple plan to build their happy letting empire.

The winner of the Scottish Asian Business Awards’ Businesswoman of the Year was announced at a special ceremony last night at The Thistle Hotel, Glasgow.

Each year, the competition has become more intense as the event itself has grown into a highly respected outlet where the best and brightest are honoured.

The aim of the Scottish Asian Business Awards is to highlight the talent and achievements of Scottish Asian entrepreneurs who are pioneers in their respective industries. They seek to capture the multicultural spirit of Scotland and, since their inception in 2006, have become highly-regarded and instrumental in maintaining social and professional relationships between different cultures.