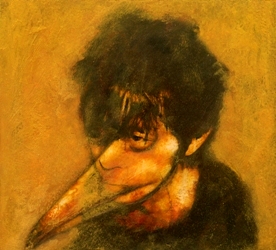 HIS latest exhibition only opened earlier this week, but, already, quick-witted art collectors have snapped up all the latest and last ever plague doctor paintings from Frank To, the young Glasgow-based artist with a growing international reputation as a leading contemporary figurative painter.

To’s last plague doctor paintings, currently on show at the Caledoniart Christmas Exhibition at the Air Gallery in London, were themselves produced following the sell-out of the original series of paintings at an exhibition in Leith this spring.

The series of figurative paintings, predominantly oil on canvas, was inspired by personal and national, historic and modern preoccupations and themes which have a direct bearing on its content and form.

To said: “In these paintings I explore the Great Plague of 1665 as a metaphor for the current global economic crisis: both events directly affect individuals, indiscriminately, regardless of whether they are rich or poor, on an international level.

“There’s no doubt that these paintings have struck a chord – they have resulted in two sell-out shows, in Edinburgh and London, in the same year, and I’m delighted with the reaction this series of paintings has received, but now it’s time to explore other subject matters.”

The last plague doctor paintings to be purchased were: The Consultation, which was on sale for £2,200; The Season of The Witch Doctor, £1,300 and Self-portrait Study With Plague Dr Mask, £600.