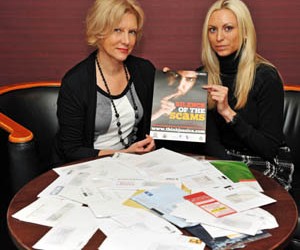 A CAMPAIGN to highlight the dangers of falling victim to scam mail criminals is being launched today (December 6, 2011).

Says a spokesperson: “Thousands of Scots – particularly the most vulnerable people in society – are being targeted each day by sinister scam mail frauds, with many shelling out large sums of money in the hope of winning fictitious prizes.

“In some cases, victims are receiving up to 70 letters each day and, tragically, five people are known to have committed suicide with many more being forced to sell their homes to keep up with the scammer’s demands.

“The shocking pain and misery that mail scams can bring is being revealed by Marilyn Baldwin, who is launching the Think Jessica campaign in Scotland after watching her mother Jessica Looke suffer at the hands of criminals for years.”

“Marilyn said her mother received around 30,000 scam letters over a five-year period and believes she parted with around £50,000 after repeatedly being conned into believing she had won money or prizes.”

Marilyn, 56, said: “It was as if she was being brainwashed or was in some cult. She was totally convinced that the paper chase the criminals were laying would eventually lead to a pot of gold.

“My mother believed that that money she was continually sending was an investment that would make her secure in her final years.

“So was controlled by these criminals to such an extent that she would willingly live on tea and toast to be sure she had money to pay the demands on the next promised big win.

“I have no doubt that the scammers contributed to her death. We think she could have parted with around £50,000 in total – but the truth is we simply don’t know as she kept so much to herself.

“It would be more accurate to say she gave them everything including her mental and physical health and the last five years of her life.”

The Think Jessica campaign is being promoted through the Scottish Business Crime Centre and the Scottish Financial Crime Group, with the aim of raising awareness of and promoting a backlash against scam mail.

Tayside Assistant Chief Constable Angela Wilson, chair of the Scottish Financial Crime Group, said: “The fraudsters who are perpetuating these scams against the vulnerable and the elderly have no thought for the trauma and upset they are causing. Their behaviour towards the most vulnerable in our society sickens and angers me.

“But everyone in Scotland can help protect potential victims. If you have a neighbour or an elderly relative, please tell them to be extra observant especially over the Festive period. Take notice if they are suddenly receiving large volumes of letters or mail. If you are in any doubt, do not hesitate to contact your local police station.

“We are also appealing to the banks for their support in this and many have been particularly helpful in reviewing their own internal processes.

Mandy Haeburn-Little, executive director of Scottish Business Crime Centre, said: “We are very pleased to be working together in support of the Think Jessica campaign which we see as part of a much wider campaign of public awareness against mail and caller scams. We will be continuing with this awareness-raising throughout the year ahead.”

Scam mail differs from junk mail as they are addressed to the victim by name. Criminals specifically target the most vulnerable members of society; the over-trusting, bereaved, superstitious, socially isolated, depressed and those with age-related declining mental health and dementia conditions. The vast majority cannot recognise themselves as victims and, therefore, never report the crimes.

After replying to first ‘tempter’ letters, victims’ names are often put on a ‘suckers’ list which are sold to other criminals all over the world, who then bombard the individual with huge volumes of mail – this is what happened with Marilyn’s mother, Jessica, who died in 2007 aged 83.

Detectives believe one criminal gang is estimated to be making £35m a year – in another example, 22,000 victims replied to one scam mail shot in one day and sent £500,000.

People concerned or wishing to obtain further information on mail scam and how to beat the scammers should go to www.thinkjessica.com. Advice is available on how to sign up to have post directed to the mail preference scheme, which would allow scam mail to be filtered out.

Charity and the voluntary sector · Scotland-wide