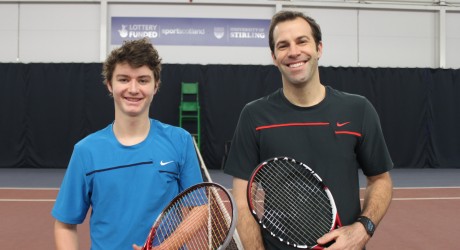 And the one-time ATP Tour World No.4, who spent three days coaching promising professional, Jonny O’Mara, was impressed with the performance programme at Scotland’s University for Sporting Excellence.

Says a spokesperson: “Rusedski, an ambassador and mentor with the Lawn Tennis Association (LTA), put the 16 year-old Dundonian through his paces during 12 hours of one-to-one court time at the centre where current world No.4, Andy Murray, and his brother, Jamie, used to practice as youngsters.”

Said Rusedski: “It is great that Jonny can train here as the facilities and support on offer are excellent. There is a good talent pool and competition is very important for young players. University tennis being offered here at Stirling is great and it helps to create competition and good practice.

“My advice to Jonny is always be professional, work hard and have the right mental attitude. To reach the top you have to know yourself inside out and push yourself through the stages. Regardless of what level you play tennis at, the mind is always key. You have to be fit, strong, focused, determined and dedicated.”

Rusedski retired from the professional game in 2007 and his new role involves developing grassroots tennis and mentoring aspiring players aged 15-18.

O’Mara won his first tournament at the tender age of seven and has recently turned professional, training with the tennis scholarship students on the International Sports Scholarship Programme.

O’Mara said: “Greg is a great mentor and his guidance has been outstanding.

“He is very knowledgeable and this is a great opportunity for me to learn from him.

“No matter how tough the training is I love every minute of it.

“I really like training at Stirling, I wouldn’t want to be anywhere else.

“The facilities are unbelievable – it has to be the best place in Scotland, if not the UK.

“It really is the perfect training ground for sport.”

Sports Management student, Joe Gill, pipped O’Mara to the Aegon British Tour Stirling title last month, but the competitions are now coming thick and fast for the teenager as he sets his sights on qualifying for the French Open Juniors and Wimbledon this summer.

Walker, who has worked with O’Mara since he was four, said: “Jonny could make the top 100 if he stays focused and committed. He has grown up a lot since he came to the University to train. It has been a steep learning curve as it is a much more challenging, professional and physical environment for him.

“Greg is one of the most positive people I have ever met and he is a great example for the students. Jonny is benefitting from some excellent mentoring and he also has the backing of a fantastic University programme.”

McGinn – the Team Scotland coach at the Delhi 2010 Commonwealth Games, added: “Having the facilities here and access to mentors like Greg is a great environment for Jonny and means he hasn’t had to go elsewhere to progress.

“Greg has really challenged Jonny and pushed him to go that extra mile.

“Tennis is so physical you have to put in legendary performances to reach the top and the system is here at Stirling to help players like Jonny reach that.”

Jonny won his first tournament ‘The Robinson Masters’ under-ten’s title at the age of seven. He first represented Scotland at the age of nine playing in the home nation’s tournament three years above his age in the under-12 age group. The same year, Jonny represented Scotland throughout Europe at under-ten and under-12 age groups. Jonny made his Great Britain debut the following year.

Jonny was ranked No.1 in Great Britain at the Under 12 age group and has been selected for every major tournament for Scotland since Under Nine. In 2010, Jonny became the Under 16’s British National Champion and in 2011 in the European Cup he won 12 out of 12 matches. The teenager turned professional in 2011.

More than 700 students have been supported by the University of Stirling’s International Sports Scholarship Programme since its launch in 1981. It provides a twin-track approach, allowing talented young student athletes to combine their education with high-performance sports success.

In 2011-12, the programme supports 100 athletes across five sports. For more information, visit www.sportingexcellence.stir.ac.uk/scholarships/tennis