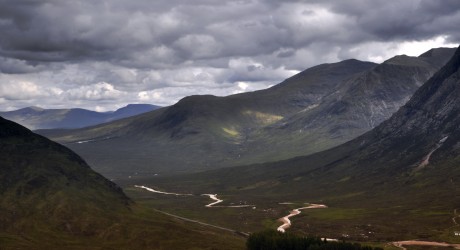 DISTANCE and cross-country runners from across the UK now have the chance to tackle a 26-mile marathon arguably more challenging than the 2012 Olympic course, thanks to a new addition to one of the country’s biggest charity events.

The Caledonian Challenge has introduced a new off-road marathon course taking in some of Scotland’s most breathtaking Highland scenery for its 2012 event, which will provide athletes with a new test of endurance to complete while raising money for deserving charities and community projects.

The new marathon course – which has been set up as an alternative option to the Caledonian Challenge’s main 54-mile trek over the West Highland Way – is one of a number of new additions for participants to choose from during the 2012 event, which include enhanced fundraising options allowing participants the chance to specifically determine which charities will benefit from the money they raise.

Organisers believe that the new Caledonian Challenge course marathon provide endurance athletes and seasoned charity runners with the most challenging route to be offered in the UK in 2012.

There will also be something for everyone on the new smaller course, as participants will be able to choose to either run the course in six hours or opt to hike the hills in 12 hours.

John Mercer, events director for the Scottish Community Foundation – which organises the Caledonian Challenge, said: “The Caledonian Challenge is one of the most well-respected events in the UK charity calendar and, as participants have to complete a 54-mile course in 24 hours, it really is a big challenge that requires months of training and teamwork to complete.

“However, because of the length of the course, we have not seen many endurance athletes or charity runners opting to run it in previous years. Therefore, we’ve decided to create a brand new 26-mile course for these people to choose to complete rather than the classic 54-mile trek.

“We hope that this will encourage more athletes to enter the 2012 event and tackle what promises to be the most stunning and challenging marathon in the whole of the UK this year. The course takes in some of Scotland’s most breathtaking scenery and will be a real test of endurance and skill, and will provide a huge sense of personal achievement for seasoned runners and fitness fanatics alike.

“We believe it is a course that will rival any other marathon or endurance run and will provide an even bigger challenge than the Olympic marathon – so it’s clear that this year’s Caledonian Challenge really is the event to take part in 2012 if you’re aiming to get fit, test your mettle and raise money for some very deserving charities and community projects.”

The Caledonian Challenge is one of the major fixtures on the UK’s fundraising calendar, regularly attracting more than a thousand entrants and raising £1 million every year for a range of charities and community projects. The event is open to teams of four-six people and participants must pledge a minimum of £400 each for charity by the deadline of March 31, although ‘early bird discounts’ are also available to entries submitted by February 14.

In 2011, a monumental £700k was raised toward local community services and projects in Scotland and this year, with the Challenge set to be bigger and better than ever, professionals are being urged to raise this figure even higher.

In addition to the main 54-mile trek, which is the equivalent of running two marathons back to back while climbing Ben Nevis twice, the 2012 Caledonian Challenge will give participants a wider choice of challenge than ever before – by offering the separate 26-mile course which can either be hiked in 12 hours or run in six hours.

Entrants are also being given the chance to determine which charities will benefit from the money they raise in 2012, thanks to a range of new fundraising options.

More information about the event and how to enter can be found on the website: www.caledonianchallenge.com/takepart

Issued on behalf of the Caledonian Challenge by the Holyrood Partnership. For more information, contact 0131 561 2244 or info@holyroodpr.co.uk.