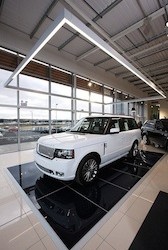 Pentland Land Rover took over the Land Rover franchise for the whole of Edinburgh and the Lothians in January.

The new dealership, built by Stewart Milne Construction, occupies a 3.45-acre site alongside the M9, west of Edinburgh. The design makes the most of the site’s location, with a fully-glazed, split-level 12-car showroom offering 180-degree visibility to the motorway.

Because of its location on the flightpath to Edinburgh Airport, the building’s height has been restricted. To maximise the available space, Mackie Ramsay and Taylor Architects have incorporated a lower ground floor, with staff facilities and two vehicle handover bays.

Extending to 30,000 square feet, the new dealership also includes a 14-bay workshop, equipped with the latest service facilities and technology, and a dedicated business centre for customers. Within the site the new dealership has an extensive 70-car used vehicle display along with customer parking.

The expansion of the Pentland Land Rover business has created 17 new jobs, with further opportunities expected as the business develops. A satellite Land Rover Authorised Repairer, to cover the eastern part of Edinburgh and East Lothian, is planned later this year.

“We are delighted that Jeremy Hicks has been with us to mark this opening. The new Pentland Land Rover dealership is a significant development for the John Clark Motor Group and for Jaguar Land Rover as it demonstrates the commitment to provide a quality customer service for Land Rover owners across the whole of Edinburgh and the Lothians.”

“The opening of the Pentland dealership is an important step for Land Rover. This customer focused investment will mean that both current and future Land Rover owners in this area will be able to get great service and enjoy the best Land Rover experience we have to provide.”

The original Pentland Land Rover dealership in Edinburgh’s Lanark Road opened in 1998, providing Land Rover sales and service for the west of Edinburgh and West Lothian.

The opening comes just 17 days after the John Clark Motor Group moved into the Perth area for the first time, with the acquisition last month of the Thomson & Potter Skoda dealership.