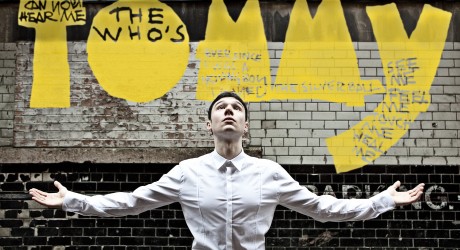 Pete Townsend’s tale of a young boys journey from  tragedy to triumph is set to rock the stage of the Royal Conservatoire of Scotland when the powerful modern rock classic, The Who’s Tommy, opens next month.

The Conservatoire is bringing together a dream team of artists to present Tommy, often described as “the most electrifying evening of rock and roll” ever to play in theatre.

This is the first full-scale rock opera ever performed at the Royal Conservatoire since it launched its Musical Theatre programme a decade ago. The production will feature a newly installed state of the art sound system so that the audience gets the best of the original music from the hit show.

The show features a live rock band with singers, dancers and actors belting out  the legendary hits by rock band The Who including  Pinball Wizard, We’re Not Gonna Take it and See Me, Feel Me, Touch Me, Heal Me….

Andrew Panton, director, said: “This is a perfect show for the Royal Conservatoire of Scotland, combining challenges for Musical Theatre, Music and Technical Theatre students all at once and to have them work together as en ensemble . It’s also a show I’ve wanted to direct for over a decade,  what a thrill to have the opportunity to collaborate on this epic production at our national conservatoire with the next generation of emergent artists.”

Tommy is the story of a ‘deaf, dumb and blind kid’ who becomes a pinball champion and cult figure. A childhood trauma renders Tommy deaf, mute and blind. He finds solace through his uncanny pinball prowess, becoming a global pinball superstar.

In partnership with Solar Bear, the specialist theatre company for people who are deaf or hard of hearing, the Conservatoire will present its first ever signed performance of Tommy.

This epic rock opera bursts to life with the graduating year of the BA Musical Theatre programme in this multi award winning adaptation.

“This will be the loudest show ever produced by the Royal Conservatoire and theatre goers are promised an extravaganza, it’ll be a show unlike any other,” added Mr Panton.

Lighting Design by Simon Wilkinson (Scottish Royal Variety Performance, Honk! A Sheep Called Skye for the National Theatre of Scotland. Simon’s lighting has won a Guinness World Record, caused reports of an alien invasion, and attracted tens of thousands of people to a windswept Highland forest).

For further details contact Katie Bell at the Royal Conservatoire on 0141 270 8387 or email k.bell@rcs.ac.uk.

Additional Music and Lyrics by John Entwistle and Keith Moon.

This amateur production is presented by special arrangement with Josef Weinberger Limited on behalf of Music Theatre International New York.

The Who’s Tommy was adapted for film in 1975.  It was directed by Ken Russell and starred the Who’s lead singer Roger Daltrey as well as the other band members.  The film also featured stage, screen and rock legends  Ann-Margaret, Elton John, Eric Clapton, Oliver Reid, Tina Turner and Jack Nicholson