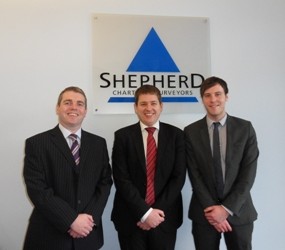 SHEPHERD Chartered Surveyors has expanded its Aberdeen office with a trio of surveyor appointments.

Mark McQueen joins the firm as senior surveyor in its established and expanding commercial department, where he is joined by Alastair McBirnie as commercial surveyor, while Andrew Michel has been appointed a building surveyor.

Chris Grinyer, managing partner at Shepherd and head of its commercial department in Aberdeen, said: “We’re delighted to secure the services of these three talented surveyors for our Aberdeen practice. Such significant investment in our human resources continues the development of the Aberdeen office and is testament to the buoyant levels of activity within the local commercial property marketplace.

“These three appointments enhance significantly our comprehensive and professional valuation and surveying service throughout the North East.”

A native of Bangor, County Down, Northern Ireland, Alastair McBirnie relocated to Scotland six years ago. A graduate of Heriot-Watt University, he joins Shepherd from Aberdeen City Council and his responsibilities will include valuations, predominantly for banks for secure lending purposes.

MEDIA RELEASE posted by Liquorice Media. You too can post your media releases (aka press releases) on to allmediascotland.com. For more information, email here.