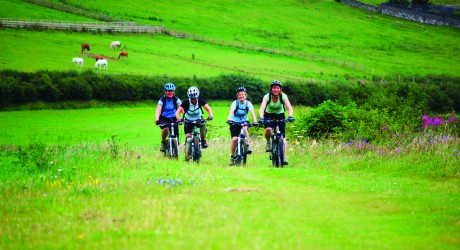 TWEEDLOVE, the popular Tweed Valley cycling festival launched in 2010, has been awarded funding from EventScotland to contribute towards an extended events programme for 2012.

The importance of the festival has also been recognised by Scottish Borders Council (SBC) who, along with the Borders Recreational Cycling Group, are supporting this year’s TweedLove that will run throughout the Tweed Valley from 26 May to 5 June.

Says a spokesperson: “In 2011, TweedLove brought around £500,000 additional spending to the Scottish Borders and was encouraged by significant print and broadcast media coverage from around the UK and abroad.

“This has resulted in some healthy private sector support for the project in 2012.

EventScotland, the national events agency, is funding TweedLove 2011 through their National Funding Programme.

Paul Bush OBE, chief operating officer for EventScotland, said: “Tweedlove is a hugely exciting event, with a range of activities that cater for cycling fans of all ages and abilities. From the returning Glentress Seven, to the brand new POC King and Queen of the Hill race, the event promises ten action-packed days.

“Scotland is the perfect stage for events, and visitors to Tweedlove will enjoy a fantastic programme, set against the backdrop of breathtaking Scottish landscapes.”

Vicky Davidson, SBC’s executive member for Economic Development, said: “TweedLove has grown in size and stature since the Council first supported it.

“I am delighted that even more businesses are involved around the additional activities being developed to showcase the Borders as a place to cycle.

“Events such as this boost our growing reputation and help us attract other cycling tourism activity that we can promote and market through cyclescottishborders.com.”

Full details of this year’s events programme will be announced on Thursday 15 March 2012.

The extended ten-day programme of open races, big guided rides (both on and off road), film (including a film-making competition) and concert nights, dual slalom and barbecue and a series of informal ride-outs will run from 26 May to 5 June throughout the Tweed Valley in the Scottish Borders.

TweedLove will also include the Queen’s jubilee bank holiday weekend in June.

Festival director, Neil Dalgleish, said:  “We’re delighted to be receiving such a high level of funding support this year.

“I can promise that the Tweed Valley cycling community will be working hard to make sure any public investment gives a fantastic return.

“We’re proud to be part of the growing bike tourism industry in the Borders and I have no doubt that we’re making progress towards showing all of our visitors that this is the best place in the UK for cycling.

“Last year’s TweedLove went so well, we thought we should make the Tweed Valley’s greatest bike party even longer.

“All of last year’s popular events will be back and we’ve got some some fantastic new surprises planned – it’s going to be mega-busy.

“Our phrase of the moment is, ‘all the riding that fits’, and I think that sums it up. Loads of free events and enough riding to wear anyone out!”

The programme will include a new energy sapping all-mountain gravity enduro race, The King and Queen of the Hill, sponsored by POC, which will see riders competing to be crowned the ‘official ruler’ of Forestry Commission Scotland’s 7stanes Glentress on 27 May 2012.

Neil Dalgleish, whose first experience of the bike industry was a school holiday job in a Peebles bike shop 30 years ago, added: “New events and showcasing the riding potential in the area are both important factors in encouraging visitors to come and ride here, and to keep coming back.

“We all love it, and I know that visitors will too.”