Media Release: Want the new iPad 3? Recycle your iPad 2 and get up to £314 towards it 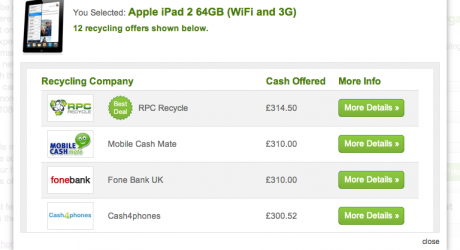 THE new iPad 3 is here and Apple has convinced many a gadget fan to splash the cash on Apple’s new iPad 3.

Says a spokesperson: “You may be tempted by the iPad 3’s amazing screen (Apple’s calling it a Retina Display), the promise of 4G mobile network access and the new faster processor.

“But what if you already have an iPad 2 or iPad 1 and can’t justify spending £399 or more on the brand new version?

“One option is to turn to eBay, along with hundreds of others, to try to sell off your now-dated technology.

“But, there’s a much easier and quicker solution – recycle it.

“The idea is already big in the mobile phone world, but many of us don’t realise that it’s just as easy (and profitable) to recycle other gadgets too, such as your iPad.

“In fact, you can currently get up to £314 for trading in your old iPad therefore covering as much as 75 per cent of the cost of an iPad 3!”

The spokesperson adds: “However, if you’ve ever tried to recycle a mobile phone or other gadget before, you’ll know that it’s important to shop around as prices offered between recycling companies can vary significantly.

“It can be tedious work, but to get the most cash for your gadget, it’s worth it. If that thought puts you off, then why not try the new, free to use, recycling site, www.RecycleYourGadget.co.uk?

“Recycle Your Gadget compares thousands of recycling deals in seconds from all the UK’s top recycling sites. You can use the website to your recycle iPad, iPod, mobile phone or one of many other types of gadgets.

“Many people are unwilling to take the risk of auctioning their unwanted gadgets on eBay so they just bury them in a drawer or worse still throw them away in the rubbish polluting the environment and wasting usable gadgets.

“Much like mobile phone recycling, there are hundreds of pounds to be made with very little risk by simply recycling anything from an iPad or a iPod or even a camera.”

The spokesperson continued: The process is entirely hassle-free. Using a very simple-to-use tool, you simply need to complete the form on the recycling company’s website and then send in your iPad. Within days you’ll have cash in your bank account ready for you to spend on iPad 3… or anything else you’d like to spend it on!

“Imagine if all these people simply threw away their old gadgets; just think of the sheer scale of waste it will produce and the harmful chemicals that leak out of the electronic components.

“This will have a long-term damaging effect on the environment, so why not help the planet them and make some cash?”

Lee, 36, director of marketing from London

“I was left with a huge credit card bill following some rather enthusiastic Christmas shopping and was looking for some easy ways to generate some cash.

“I am a sucker for new technology and have a drawer full of old mobile phones and a couple of cameras. I work long hours and didn’t have the time to trawl the recycling sites to find the best deal so a friend recommended RecycleYourGadget.co.uk to me.

“I recycled three phones – including a Blackberry and my old iPod Nano – and made £240, paying off my credit card bill in full and clearing some space in my drawers at the same time!”

RecycleYourGadget.co.uk is part of the GadgetStylist.com group, including GadgetStylist.com, DigitalTVSelector.com and BoardStylist.com. The website was set up in 2011 by Chris Frost, formerly of uSwitch, Review Centre, Orange and Vodafone.

MEDIA RELEASE posted by RecycleYourGadget.co.uk. You too can post media releases (aka press releases) on allmediascotland.com. For more information, email here.