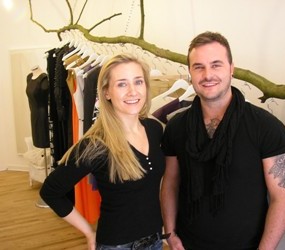 Design Collective Scotland was formed last September as a vehicle for the promotion of contemporary Scottish fashion design and a platform for nurturing fashion creatives in Scotland.

Eighty Six, its shop at 86 Dumbarton Road, Glasgow, will stock only Scottish designer labels and feature only high-quality items from relatively new designers.

But not only can customers pick up designer items; Design Collective Scotland will launch a training academy at the same premises with designers teaching a range of advanced pattern cutting, advanced dressmaking, knitting and shoe design/making skills.

Shoe designer, Emily Lamb, said: “The idea behind the 86 venture is to act as a showcase and outlet as well as a support system for ourselves and fellow designers as all profits from the shop will go towards paying for all the designers stock in the shop and to help them show at forthcoming international fashion week events.

“The training academy will teach a range of fashion trades and crafts to students in Scotland and help them through the transition from graduating from college or university through to starting their own label with hands-on guidance from designers already working for themselves.

“We have opened 86 not only to have an outlet for our own brands, but to create a support network for emerging designers that does not presently exist within Scotland.”

A number of other designers are set to join the shop over the coming months.