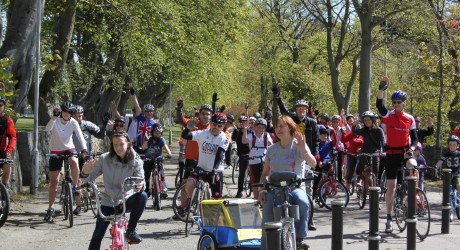 AN army of local cyclists have raised more than £2,000 for good causes by taking part in the eighth annual Bon Accord Bike Ride.

The event – which attracted more than 60 riders – was organised by the Rotary Club of Bon Accord and took place in and around Aberdeen’s Hazlehead Park on Sunday, May 20th.

Also on offer to participants were a seven mile journey and a more challenging 22-mile circuit through the Aberdeen and Aberdeenshire countryside.

Commenting on the success of the 2012 event, Rotary Club of Bon Accord founder member and Bon Accord Bike Ride co-ordinator, Colin Reid, said: “The weather was perfect on the day and we were delighted that a lot of younger children and family groups took part.

“This is the eighth Bike Ride and, including this year, 1,000 participants have helped raise over £27,000 for charity over the years.”

Sam Murray of Hermes Datacomms, added: “We were delighted to support this worthwhile event which not only helped a number of deserving local and international charities, but brought everyone from cycling fanatics and toddlers out on their bikes for a day of fun and exercise.”

The Rotary Club of Aberdeen Bon Accord was established in 2004 and is one of Aberdeen’s newest Rotary Club’s and the only one to hold weekly breakfast meetings.

These take place at the Cults Hotel between 7.15am and 8.30am and new members are welcome.

To find out more, visit www.bonaccordrotary.com.