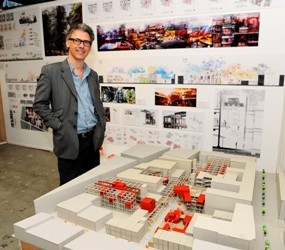 The firm’s £1,000 sponsorship of student prizes is widely acknowledged as an enterprising initiative bringing together an internationally-renowned private sector practice with a world-leading architecture school to recognise student excellence.

Commenting on the winning projects, James Dick, who leads Sheppard Robson’s Scottish office, said: “We were very impressed with the standard of projects this year and congratulate Zichao and Jack, both of whose projects reflects our own design approach, which seeks to explore new ideas, processes and technologies, and share our commitment to sustainability.

“Zichao’s project was not only visually dramatic and striking but thought provoking regarding inner city retail and existing shopping centres generally.

His approach was to deconstruct, piece by piece and over time, a typical bland mega shopping centre in Dublin, but at the same time maintaining a commercial awareness.

“This has created an architecture that has a greater sense of townscape that knits better into the tight urban grain of Dublin.

“Whilst many students focused on a particular building, Jack has thought very carefully about the streetscape itself and his project seeks to create interesting hard landscape and building interventions to enliven the route for the pedestrian through the town.

“He also had a very bold and poetic design for a writing retreat at Little Sparta, the garden of artist Ian Hamilton Finlay.”

Alan Hooper, undergraduate programme leader, Mackintosh School of Architecture, said: “Sheppard Robson’s innovative sponsorship of these student prizes has clear mutual benefits in that it provides an opportunity for the School to have a meaningful dialogue with a private sector practice on the one hand whilst, on the other, provides Sheppard Robson with a valuable insight into the work produced by students at the School with the opportunity to discover and reward fresh architectural talent.”