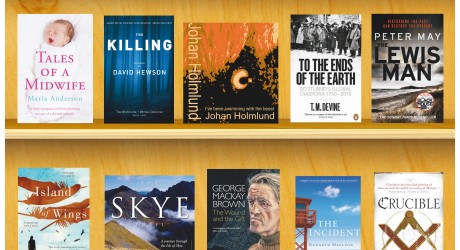 EDEN Court has today unveiled the line up for the 9th Inverness Book Festival.

From Wednesday 25th July to Saturday 28th July, the festival is all neatly packaged under one roof and includes, as always, a varied programme with something to suit all tastes and all ages.

David Hewson (Thu 26 July, 18.30) will be talking about his literary adaptation of the award-winning Danish TV crime series, The Killing.

David is also the bestselling author of 22 novels and his popular Costa crime series is currently in development for a series of TV movies in Rome.

Swedish writer, Karin Altenberg (Sat 28 July, 14.30) will be discussing her debut novel which is set in 1830 on the island of St Kilda.

Described as stunning by The Guardian, Island of Wings sees a newly-married young woman discover that her marriage is as treacherous a country as the land that surrounds her.

Based on research presented in his recent bestseller To The Ends of the Earth, Professor Tom Devine, senior research professor in History at the University of Edinburgh, will be exploring the reasons behind the remarkable scale of Scottish Emigration in the 19th and 20th century (Sat 28 July, 20.30).

Fans of the great outdoors won’t want to miss one of the most recognised figures in the British outdoor scene, Cameron McNeish (Thu 26 July, 20.30) as he presents a behind-the-scenes insight into some of his work with the BBC and screens some incredible live footage.

Author of the hugely successful Tales of a Midwife, Maria Anderson, is the Senior Charge Midwife on the delivery suite at Raigmore hospital in Inverness.

Throughout her career Maria’s witnessed everything you could possibly imagine and she’ll be discussing her experiences and the effect that it’s had on her life (Wed 25 July, 18.30).

Talking of new life…The Eden Court CREATIVE team have come up with a selection of events for families including the return of the Eden Court Planetarium with Star Gazing (Wed 25 and Thu 26 July, 14.00); tall tales from a Giraffe who can’t dance in Swinging Stories (Thu 27 July, 13.00), plus a great giggly time is in store with the Tricksters, Charlatans and N’er Do Wells (Sat 28 July 11.00).

As well as the Eden Court CREATIVE family events, there’s also the return of the fun, free, friendly, interactive storytelling, rhyme and play sessions with the hugely popular Bookbug (Thu 26 and Fri 27 July, 11.00 and 14.00).

As ever, to round up the festival there will be the brain boggling Book Festival Pub Quiz and this year there’s a chance that some authors might turn up too.  Who knows, they might even form a team of their own!

Printed guides will also be available to collect from Eden Court, the tourist information office and local libraries from Friday 22 June onwards.

Full details can be found and tickets are on sale from www.eden-court.co.uk