Media Release: Students get a taste of TV stardom 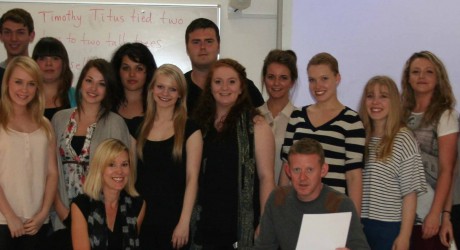 ASPIRING film and TV actors from a leading Edinburgh college received a taste of life on screen, thanks to special performance workshops held by two of Scotland’s well-known TV faces.

Former Taggart star, Colin McCRedie, and ex River City regular, Jenny Ryan (also an ex-Telford Student), were on hand during a series of work shops to provide advice for students on how to get into TV acting and maximise their performance in front of the camera.

Over 20 students from Edinburgh’s Telford College Performing Arts Studio Scotland (PASS) benefited from a combined 50 years-plus experience of on-screen acting from the duo, designed to provide a real taste of a career in the film and TV industry.

Scott Johnston, programme area leader at PASS who organised the workshops, said: “It is great that two of Scotland’s most hard-working and talented TV actors are able to come in and speak with the students.

“The work shops have been great so far and a real eye-opener to the world of television. We have a group of seriously talented individuals here at PASS and we work hard to ensure they get to experience all aspects of an acting career.

“Most performing arts courses are very heavy with theatrical performance and students get very little chance to experience what it’s like working in front of a camera, which is totally different than being on stage.

“Thanks to Colin and Jenny, the students know have a real and tangible understanding of how TV acting works and hopefully they will be able to apply this to their future work and who knows some of them may even go on to be the TV stars of the future.”

The workshops covered subjects such as show-reels, auditions and TV script work as well as covering some of what happens behind the camera.

Colin McCRedie is best known for playing DC Stuart Fraser in one of Scotland’s most popular crime series Taggart. Since leaving the show two years ago, Colin has gone on to hold many starring roles, including Nick Morrison in River City, as well as various film, TV and theatre roles.

He said: “It’s been brilliant working with the fantastic students at Telford and sharing the technique and experiences of acting on film with them. And who knows, maybe we’ll spot the next Karen Gillan.”

Ex-Telford student, Jenny, said: “It’s been a pleasure to visit my old college and see the fantastic facilities they have here now and to work with the students who judging by their final performance last week the students are of an exceptionally high standard.”

PASS was set up in 2010 to offer an extensive range of performing arts courses to Edinburgh students. Designed as a training institution for those looking for a career in the performing arts, it allows students to showcase their talents through a variety of performance choices.

Scott added: “The concept of PASS is something we have been developing at Telford for some years now, with an aim not only to provide a state-of-the-art teaching environment for Scotland’s aspiring actors, dancers and theatre technicians, but to also give the performing arts industry in Scotland a boost by providing a dedicated, professional training academy.”

More information about PASS can be found at Edinburgh’s Telford College’s website www.ed-coll.ac.uk.