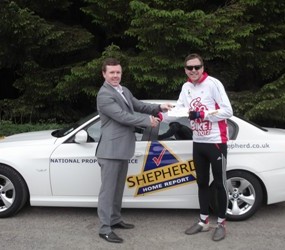 SOMETIMES, sponsors of charity fundraising events can wind up getting more involved than they might have anticipated.

That certainly was the case when Shepherd Chartered Surveyors sponsored the On Yer Bike Celebrity Challenge fundraiser for the Donna Louise Children’s Hospice which saw such celebrities as comedians, Nick Hancock and Hugh Dennis, and fashion designer, Jeff Banks, participate in a 960-mile non-stop cycle relay from John O’Groats to Land’s End in a bid to raise £100,000.

In the event, Shepherd had to ride to the rescue of presenter Mark Chapman of BBC Radio 5 live and ESPN who, due to unforeseen circumstances, became stranded in Ayrshire and needed to be driven at full speed to Media City in Manchester in time to present his radio show.

A Shepherd surveyor duly stepped up to drive Chapman to Manchester and back to enable him to broadcast his show before re-uniting him with his team at midnight to go straight back onto the bike for the remainder of his stint.

William Rennie of Shepherd’s commercial agency and management department, said: “We were delighted to step up and help our Mark in his hour of need – and delighted too to lend our support for such a worthy cause – and would congratulate both teams of riders on their tremendous achievement.

“Both teams rode for four stints continually over the space of a week and particular mention must be made of the pace man, Jeff Banks, who, at 69, showed the youngsters how it should be done!”

The Donna Louise Children’s Hospice provides a range of specialist care and support services for children with a shortened life expectancy and their families from a purpose-built house in Stoke on Trent. The £100,000 target has already been met with donations still pouring in.