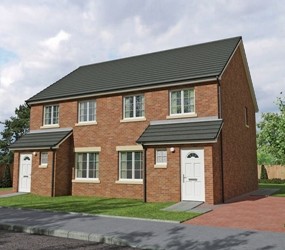 THE opening today (29.06.12) of two new show homes at St Clement, Gartloch Village, alongside an Information Centre telling the tale of this picturesque and tranquil village location, offers house hunters a valuable insight into the attractions of life in a countryside retreat on the outskirts of Glasgow.

In the heart of Gartloch Village is St Clement, an idyllic country hamlet and a perfect place to set up home.

Aidan McAvinue, of Gartloch Village developer New City Vision, said: “If you’ve always thought that being able to live in a mature countryside setting with its own loch and wildlife habitat, was just a dream, think again. Designated as a protected nature reserve, Gartloch Village offers everything you could image about living in the country; woodland walks, a beautiful loch and a good deal of peace and quiet – it’s all here just waiting to be discovered.

“The opening of our show homes at St Clement mark the opening of phase two of this hamlet which will see 46 terraced, semi-detached and detached homes erected over the coming months, whilst our new Information Centre tells the fascinating story of Gartloch Village, the history of which stretches as far back as the Iron Age and provides early details of the fabulous refurbished Victorian apartments due to become available early next year.”

Gartloch Village is just ten minutes from Glasgow city centre and only five minutes from the Glasgow Fort retail park, offering all the benefits of a countryside hideaway and a fantastic location to bring up a growing family.

Homes at St Clement, Gartloch Village start from £154,950. To find out how you can put some roots down in the country on the outskirts of Glasgow city centre, call Karen McGoldrick on tel 0141 771 8023.