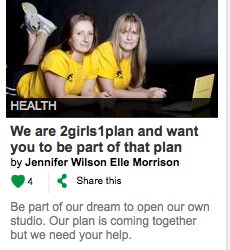 ON a mission to remain fiercely independent, two female entrepreneurs are so serious about  achieving their vision of opening their own alternative fitness studio, they’re pioneering a new financial business start-up model, called crowdfunding.

With the current lack of funding for the over-30s, along with the recession, crowdfunding has attracted a new generation of business owners, who need to be creative in how they raise funds.

Says a spokesperson: “Not put off by the lack of funding available through Government initiatives and banks, these women provide a service that is in high demand and they are going to make it happen with their original crowdfund campaign that will help raise funds for them to open their first pilates and spin studio in Glasgow.”

Says Wilson: “From the moment we started this business we promised ourselves that we would not put the business in the red; not that it’s been an option as banks aren’t giving out loans the way they used too.

“We had heard of crowdfunding but didn’t realise it was right on our doorstep, BloomVC is a Scottish company owned by Amanda Boyle & Michelle Rodger, meeting them we were blown away by their enthusiasm and excitement for our project.

Morrison adds: “Our business is all about collaboration, not competition, it’s in our nature to share; that’s why we are a good partnership and we love the idea of anyone being able to help fund our dream.

“People like to be involved and this is a great way of doing it.

“When people make a donation or promise on the BloomVC site, they can get various rewards ranging from a cyber High 5 that we put out on twitter to a discount of 20 per cent off Forward Fitness services for life. It’s just such a new, unique way to get you business started.”

Wilson adds: “We have been really stunned by the response so far, everyone has been sharing the crowdfund on Facebook and Twitter and the promises and donations that people are making has overwhelmed us. Initially, we didn’t think that crowdfunding was for us but now we know it’s the only way for our company.”