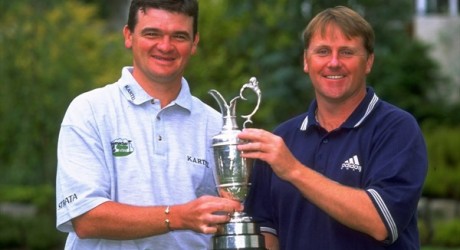 A PRO-am tournament has been launched in memory of the late Scottish golf professional and coach, Adam Hunter, to help raise funds for the ‘Friends of the Beatson’ charity.

Hunter, whose career highlights included winning the 1995 Portuguese Open and coaching Paul Lawrie when he won the 1999 Open Championship at Carnoustie, tragically died of leukaemia in October of last year.

The Sandyhills Golf Club member passed away at the Beatson Oncology Centre in Glasgow following a brave two-year battle with the disease.

Now, some of Hunter’s closest friends and colleagues have created a pro-am golf tournament to be held at Gleneagles on Friday October 5, both to honour his memory and to help raise funds for the centre which treated him.

McAllister said: “Adam was not only a brilliant golfer, he was also a special person and a very good friend. We were determined to stage an event to celebrate his life and his achievements, as well as saying thanks and giving something back to the Beatson where he was cared for so well.

“With the blessing of his wife, Caroline, and the rest of the family, we have all worked together to create that event which we hope will provide a fitting tribute to Adam.

“There has been a terrific response from the Scottish golf community so far and we look forward to selling the remaining places to allow us to raise as much money for the Beatson as we can.”

The ‘Friends of the Beatson Pro-Am Golf Tournament, in memory of Adam Hunter’, is being supported by the Aberdeen-based Asco Group and bookings including one from the Paul Lawrie Foundation.

• Breakfast and lunch – in the fabulous newly revamped Dormy House

• Saturday breakfast plus full use of Hotel practice and leisure facilities

Born in Glasgow on September 26, 1963, Hunter was a Scotland boy and youth international and spent a couple of years at Virginia College in the United States before he turned pro in 1984.

He had several spells on the European Tour, the highlight of which came in 1995 when he won the Portuguese Open in 1995, beating Darren Clarke in a play-off. Adam was also a successful Tartan Tour campaigner in the mid-1980s.

He won the Granite City Classic and the Scottish Under-25s championship in 1985. In 1986 he won the Carnoustie Challenge and in 1987 lifted the Northern Open championship at Royal Aberdeen.

In his later years, Hunter established a reputation as a very good coach, principally with Lawrie who won the Open championship at Carnoustie in 1999. His forte was the short game.

In 2010, Hunter was appointed head coach of the Scottish Under-16s by the SGU, having spent six years prior to that as a Scottish Golf Academy coach.

He was also awarded PGA Fellow Professional status in recognition of his outstanding achievements in the game.

Hunter opened his own golf school at Newton Mearns, near Glasgow, but used Kingsfield near Linlithgow more recently to work with Lawrie and his other pupils.

Issued by The BIG Partnership on behalf of Friend of the Beatson.

About Friends of the Beatson:

The Friends of the Beatson Centre, located on the fourth floor of the recently built Beatson West of Scotland Cancer Centre building, has been designed as a ‘retreat’ for patients and a place of calm. It was constructed by and is run by Friends of the Beatson and is independent of the main hospital operation.

The imaginatively-designed centre provides a relaxing and therapeutic environment with complementary non-medical services designed to assist the wellbeing of Beatson patients.

As such, it is a very special place.

• lounge with wonderful views over the West End of Glasgow

• state of the art music facilities

To find out more about the Friends of the Beatson Centre visit www.friendsofthebeatson.org or call 0141 301 7667