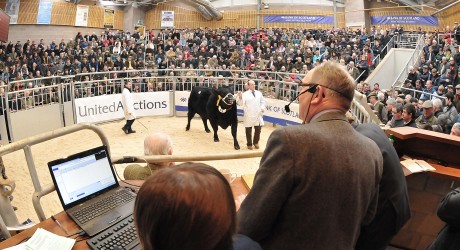 SCOTLAND’S leading livestock auctioneers and procurement specialists have taken the decision to update the Bull Sales’ brand to reflect its Stirling location.

The world-famous event, established in Perth in 1865, takes place annually in February, May and October and attracts more than 22,000 UK and international visitors each year.

The Sales were transferred to Stirling in 2009 as part of the company’s amalgamation of its Perth and Stirling businesses into a single centre of operation at the new Stirling Agricultural Centre.

While it made sense to retain the internationally-recognised brand at that time, it has become clear that the name creates misunderstanding regarding where the Sales actually take place as well as ambiguity in how to refer to them.

Said David Leggat, executive chair of UA: “We are incredibly proud of the Perth element of the Bull Sales’ heritage, which is held dear to many people, including myself. However, the event has been known anecdotally as the Stirling Sales since they moved here nearly three years ago and we feel the time is right to officially adapt the name for clarity of location.”

Said Stirling Labour MP, Anne McGuire: “I am delighted that UA have decided to rebrand the Bull Sales as the Stirling Sales.  The success of the new Auction Mart has no doubt played a part in this decision. UA made a strong commitment to Stirling with the massive investment in the Mart, and as a strong supporter of the development since the beginning; I wish the newly renamed Stirling Bull Sales in October every success, which will attract buyers and sellers from all parts of the UK and beyond.”

Commented Bruce Crawford, SNP MSP for Stirling: “Changing the name to the Stirling Bull Sales makes sense and should help avoid confusion. I also feel that this change of name reflects the fact that the Bull Sales have been a very welcome addition to the Stirling area in recent years that have made this area at the very heart of Scotland’s agricultural industry.

“After great success in recent years, I am sure the Stirling Bull Sales will go from strength to strength in the years to come.”

Said Stirling Council’s Provost, Mike Robbins: “It’s terrific to see the renaming of the Bull Sales to reflect their new home here in Scotland’s heart. The Sales are a major event in the agricultural calendar and bring thousands of visitors to our area.”

The format and all other aspects of the Sales will remain the same.

The new brand comes into immediate effect with the first, official Stirling Bull Sales being the Autumn Sales held from October 22nd to 24th 2012.

The company conducts auctions of both commercial and pedigree sheep and cattle, provides farm-to-farm and farm-to-abattoir procurement services and hosts the world-famous Stirling Bull Sales (formerly the Perth Bull Sales) at its HQ, the Stirling Agricultural Centre.