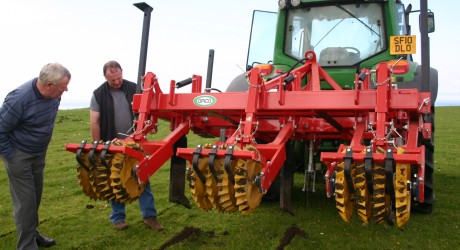 GRASSLAND improvement methods were the focus at the recent meeting of the Kintyre monitor farm.

Duncan Macalister, the monitor farmer who owns and farms the 1,730 acre (700 has) Glenbarr Farms, is determined to lift productivity while reducing reliance on purchased fertilisers.

Mr Macalister runs 140 suckler cows and 550 breeding ewes with all progeny finished, other than retained replacements. Just over 100 acres (40 plus has) of spring barley is grown, with the grain and straw used on-farm.

Having decided that some of his long established leys should be more productive, Mr Macalister is keen to rejuvenate this grassland, but without ploughing.

At the January 2012 monitor farm meeting, soil specialist James Bretherton had advised the group to “avoid ploughing whenever possible” as it weakens the soil’s strength.

“If you must plough, do not plough deeply because this will bury and kill the organic matter which is vital to the soil’s structure and fertility,” observed Mr Bretherton.

One of Mr Bretherton’s recommendations for grassland rejuvenation was to direct drill a selected grass seed mix with a ‘Baker Boot’ drill.

This type of drill first opens the soil with discs. Mounted behind the discs is the ‘Baker Boot’, which creates a pocket for the seed, which is fed via a tube from the seed hopper.

The land then either needs to be Cambridge rolled or gently grazed with livestock to ensure seed to soil contact.

The community group also suggested trying a Koeckerling Grasmaster, which has spring vertical double tines and an air box seed hopper, which is connected to the PTO shaft.

Before releasing the seed, a couple of passes over the grass with the Grasmaster opens up the sward and pulls out dead vegetation, improving access for the seed to the soil.

Once the sward is scarified, the final pass is made with the air box seed hopper engaged, from which seed is blown along tubes to plates, set amidst the tines which agitate from side to side. The seed bounces from the plates onto the scarified sward.

As with the ‘Baker Boot’ drill, after sowing, seed to soil contact is assisted either by rolling or gentle grazing.

In an effort to establish the more effective method, a section of a field was divided into two, with one half direct drilled with the ‘Baker Boot’ drill, and the other half sown with the Grasmaster. Sheep were then turned in, to help seed to soil contact.

The same grass seed mix, specifically designed for over-seeding grazing fields, was used in both machines. The mix was 90 per cent of Tetraploid Perennial Ryegrasses – two Intermediate (‘Magician’ and ‘Calibra’) and two Late (‘Glencar’ and ‘Polim’), plus ten per cent of a grazing blend of white clover. The seed rate was 10 kgs per acre.

A further dimension to the trial involved using the ‘Baker Boot’ drill to sow a number of strips with the same seed mix, but coated with clay and fertiliser – 20 per cent Nitrogen and four per cent Phosphate (the remaining 76 per cent was clay to bind the fertiliser to the seed). Due to the weight of the coating, this seed was sown at 20 kgs per acre.

The coated seed is considerably more expensive, but thanks to the fertiliser stimulating only the seed and not the surrounding plants, the coated seed is claimed to result in up to 60% better germination than the un-coated.

In the case of both machines, the shorter the grass the better the opportunities for the new seed to establish.

“I’m hoping that at least one of the methods we’re experimenting with works well,” remarked Duncan Macalister. “They each offer the benefits of no loss of grazing time and they’re much cheaper in time and power costs than ploughing to re-seed.

“Also, I was previously a firm believer in the need to plough deeply but I’m now converted to the philosophy of retaining the organic material in the top layer of the soil, instead of burying and killing it by deep ploughing.”

Another of soil specialist James Bretherton’s main recommendations had been for Mr Macalister to ensure that his soil has air in it. He had told the group that air was crucial.

“Anaerobic (absence of oxygen) soils often have poor drainage, which suppresses soil temperature, resulting in slower grass and plant growth. A lack of air also restricts the Nitrogen cycle and uptake of natural Phosphate and minerals.”

Livestock can be responsible for the compaction of the top three inches of a sward’s soil, and Mr Bretherton recommended a sward slitter (not on light soils) to break up this compaction and allow air into the soil.

QMS chair, Jim McLaren, attended the meeting and was clearly impressed with Duncan Macalister’s determination to improve the productivity of his land.

“We can talk for ever about things like CAP Reform, bureaucracy and farming politics, things which we have little control over, whereas Duncan Macalister is concentrating on improving things he can influence, like his farm’s ability to grow grass.

“Working with the resources the farm offers, he has identified opportunities to maximise value, by focussing on quality, while also working with nature.”

The next meeting of the Kintyre Monitor Farm will be held in early September and the topic will be cattle.

For general information on Monitor Farms, plus detailed reports of meetings: www.qmscotland.co.uk/monitorfarms

Photo caption: Duncan Macalister and a group member taking a close look at the sward slitter.

MEDIA RELEASE posted by QMS. You too can post media releases (aka press releases) on allmediascotland.com. For more information email here.