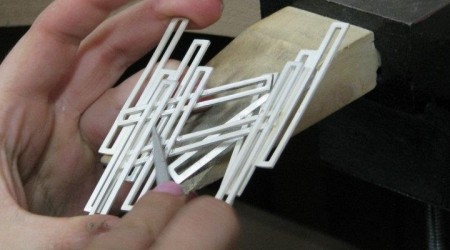 AS our paralympians line up on the starting line today hoping to bring us more bling, just 500 miles away in Edinburgh the finishing touches are being applied to the jewellery world’s own games ‘Ready Steady Jewel’, which culminates in a spectacular charity auction this Friday evening.

The annual charity event, which started just three years ago, sees the hottest young jewellery designers clamouring to use the platform as a showcase for their work, allowing it to be auctioned for charity and are hoping to raise over £5,000 in the process.

Today, at the Precious Metals Workshop in Edinburgh, Ian Nicholson and his team of auctioneers are getting ready to set the capital aglow with some unique and glittering original pieces which were created by their designers in just eight hours, thanks to a mystery bag of precious metals and stones.

“Ready Steady Jewel started as an idea to provide talented young jewellers leaving university with a platform to showcase their work,” said Ian, its founder.

“Based loosely on BBC2’s Ready Steady Cook, we replaced the chefs with jewellers, and the food with silver and gold, and gave them just eight hours to create an item of jewellery from scratch. They then face the ultimate test for their work by selling it at public auction.”

All 15 participants, ten of which include current university graduates from Glasgow School of Art, Duncan of Jordanstone, and Edinburgh College of Art, have had their work on display for the last two weeks at the Scottish Gallery in Edinburgh and will now face the toughest test of all this Friday evening: The Auction.

All 15 unique pieces will be put to the ultimate public test, with hundreds of people fighting it out for thousands of pounds of jewellery, hoping to bag a bargain and a piece of collectable jewellery.

“Although it’s all good fun, there is a very serious side to what we’re trying to achieve,” said Ian.

“We’re hoping we can raise some much needed funds for four worthy charities, Macmillan Cancer Support, the Katie Piper Foundation, The Prince’s Trust Youth Business Scotland, and Leith School of Art so we’re keen for people to support the event by coming along, buying a raffle ticket and bidding in the auction. There’s something for everyone.”

The event is open to the first 300 attendees through the Out of the Blue Drill Hall doors on Friday 31st August at 5.30pm. Online bidding closes at midnight on the 30th August.

Entry is just £3 all of which goes to charity although, for those wishing to make a night of it, VIP tickets are also available at £25 which includes beverages, canapés, a raffle ticket (where even more jewellery can be won) and an opportunity to meet the jewellers.

For more details on the event or to book tickets please visit www.readysteadyjewel.com.