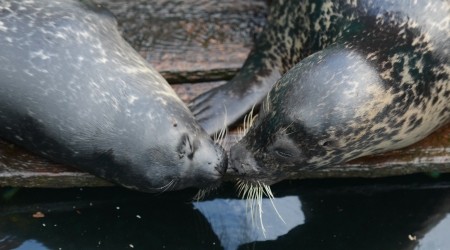 ST Andrews Aquarium announced today that they are imminently anticipating the exciting arrival of two new flippery residents next week.

Leif (four months) and Nelly (13) are a pair of Denmark-born harbour seals, mother and son, who are scheduled to be transferred to St Andrews Aquarium in Scotland, on the 19th and 20th September respectively, from their current home at the Fisheries and Maritime Museum in Esbjerg, Denmark.

Four month-old seal pup, Leif, will brave the journey first on Wednesday 19th September, flying solo into BAA Aberdeen Airport, thanks to the assistance of airline bmi regional who operate the daily connection between the Danish city of Esbjerg and Aberdeen.

He’ll be followed 24 hours later by his mother, Nelly, on Thursday 20th September for whom the journey will have a poignant ending, when she will be re-united with her two year-old seal pup, Togo, who made the same journey to St Andrews Aquarium in July last year.

The transporting of one seal is no easy task, but two in as many days is a challenge to which bosses at bmi Regional were quick to rise.

Graeme Ross, director of product and sales, bmi regional commented: “Both Leif and Nelly will be in very capable hands from the minute they reach the airport in Esbjerg until the minute they land in Aberdeen and are handed over to the Aquarium team.

“Nelly and Leif’s story of starting a new life in Scotland is an exciting one and we are glad to be helping them on their way to their new home in St Andrews and to reunite both of them with their son and big brother, Togo, whom we helped transport just last year.”

After clearing immigration at BAA’s Aberdeen Airport, Leif and Nelly will be transported by road in the final leg of their 1253km journey to join St Andrews Aquarium’s headline grabbing seal, Laurel, whose antics following the arrival of Togo last year saw her catapulted to international fame via video sharing site YouTube when she scaled the 4ft separating fence to meet her new flippery pal just hours after his arrival.

Bosses at St Andrews Aquarium have already learned from past experience and have been busy constructing what they believe is a ‘seal proof’ divide to ensure the animals are kept in insolation for the allotted period.

John Mace, manager of St Andrews Aquarium, commented: “This time we’re taking no chances! There are no rungs for Laurel (or Togo) to climb and we’re fairly certain that the isolation pool is appropriated sealed off, so to speak.

“We’re really excited about welcoming Nelly and Leif to our animal family here at St Andrews Aquarium and we’re extremely grateful for bmi regional for their help in assisting with the journey for both seals and making it as straightforward as possible.”

Harbour seals are in steep decline in the UK and Aquariums can only accept the transfer of seals which have been born in another Aquarium, itself a rare occurrence.

Laurel and Togo are one of the main attractions for St Andrews Aquarium in Fife and it’s expected that visitors will be eager to give their seal of approval to its two newest residents, Leif and Nelly, warmly welcoming them to their new home on Wednesday 19th and Thursday 20th September respectively.

To celebrate their arrival and ensure a strong welcoming committee, entry to the Aquarium after 4pm on both days will be half price.