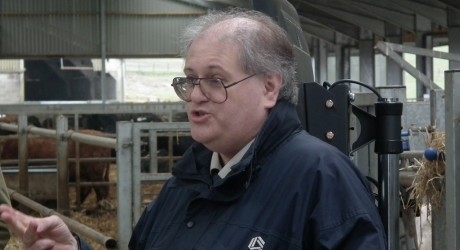 HILL and upland farms in Scotland are not being given the credit they deserve for the substantial role they play in improving the environment through the removal of CO2 from the atmosphere, according to the lead researcher in a Quality Meat Scotland-funded project.

Dr Jimmy Hyslop, SAC Beef Specialist, said that while the role of sheep and cattle as sources of Greenhouse Gas (GHG) emissions, principally methane (CH4) and nitrous oxide (N2O), is high profile, the environmental benefit many farms deliver through carbon sequestration is not generally appreciated.

Speaking at an event to launch Quality Meat Scotland’s latest Research and Development report, Dr Hyslop emphasised that calculations which do not consider the role of grassland in sequestration (capturing and storing carbon) ignore a huge part of the pollution equation.

“At a farm scale level, several carbon footprint calculators are now available to estimate the tonnes of CO2 equivalents (t CO2e) produced for each enterprise. The results are usually expressed per tonne of food product – per tonne of beef or lamb produced.

“However, while there is general acceptance that grassland does sequester carbon, no assessment of this is currently undertaken because no accepted mechanisms exist to achieve this in practical circumstances on farms.

“The next step is for further research to develop methods to calculate the carbon sequestration potential of land which will deliver at a practical farm implementation level.”

While there are some techniques around to look at this challenge, these are very much at an early stage, said Dr Hyslop. Meanwhile, he pointed out that the livestock industry is being asked more and more, by processors and retailers, to provide information to be used to calculate the carbon footprint of their farms.

“In Scotland, we have a lot of hill ground with low stocking rates which doesn’t emit much CO2 equivalent per hectare and vast areas of grassland sequestering carbon.

“We can’t say with certainty that these unimproved or semi-improved areas are sequestering an amount of carbon which would offset the equivalent being generated by beef and lamb production on these farms because we don’t have the technology to prove it, however, it probably is the case.”

The project Dr Hyslop has been working on for QMS saw data and background information on suckler beef and sheep systems typical of those found on progressive Scottish livestock farms collected from 21 farms throughout Scotland.

“We used this information in the calculation of a standard ‘carbon footprint’ for beef and sheep production systems and then re-calculated this to be expressed in terms of carbon sequestration needed per ha of grassland to wholly negate these ‘carbon footprints’,” said Dr Hyslop.

Farms were assessed on an unadjusted ha basis (i.e.no adjustment was made to the area of grassland depending on productivity capacity) so that GHG emissions could be linked to the carbon sequestration potential of grassland directly on a per ha basis.

Saleable outputs ranged from 12 – 206 tonnes cold carcase weights (CCW) with an average of 101 tonnes CCW per farm. When allocated across farm area, this represented an average output of approximately 130 kg CCW/ha.

The average carbon footprint for beef production systems across the farms sampled was 23.2 t CO2e/t CCW (range 15.5 – 50.1) and was in keeping with other such calculated values elsewhere.

Similarly, average carbon footprint for sheep production across the farms in question was 28.5 t CO2e / t CCW (range 12.8 – 92.6) and while the range was large, this average figure was also in keeping with similar calculated values for sheep enterprises.

Using a conservative conversion factor of 3:1, a ‘carbon footprint’ expressed in tonnes of CO2e can be converted into tonnes of carbon sequestration needed to negate the carbon footprint per ha of grassland on the farm.

Using this calculation for each of the 21 farms sampled, the tonnes of carbon sequestration per ha that would be needed to negate the GHG emissions associated with their beef and sheep production systems was calculated.

“Extensive farms with low stocking rates (less than 0.5 LSU/ha) have low outputs of GHGs and therefore have a low requirement for carbon sequestration ( less than 0.4 t/ha) from their own livestock production.

“However, these farms in particular, also have large areas of grassland with the potential to sequester carbon.”

Dr Hyslop added: “While the methodology remains to be tested and the figure for carbon sequestration potential identified in a recent European project remains to be validated it is widely accepted that soils growing Scotland’s grassland may be capable of sequestering at least a substantial part of its livestock based CO2 equivalent emissions.

“Further research work to establish these recent developments in carbon sequestration methodology is required, particularly in the area of actual carbon sequestration potential of individual grassland sites to provide reliable predictors of this capacity under practical farming conditions.”