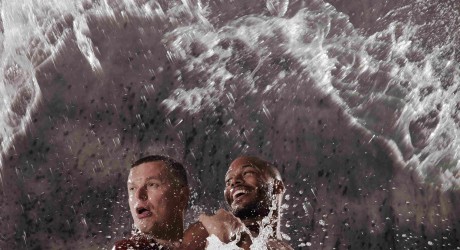 The National Theatre of Scotland and The Arches

LIFEGUARD is an intimate and immersive theatrical experience about human beings and their relationship to water and swimming. Taking place in the disused teaching pool of the Govanhill Baths from 5 to 27 October 2012, the audience will have the opportunity to enter into a multi-sensory poolside encounter with their own ‘lifeguard’.

Through the narrative of a relationship between a lifeguard and a swimmer, the audience’s complex and ambiguous relationship with water is explored.

A young man, under the guidance and encouragement of an experienced, older man, is taught to overcome his fear of water and to swim. However, just when the young man might be tempted to think he’s untouchable, something happens which changes the lifeguard and swimmer’s lives irrevocably.

lifeguard is an intimate performance for a small audience with live performance by Adrian Howells (the lifeguard) and Ira Mandela Siobhan (the swimmer); movement and physical ‘score’ by Jane Mason; soundscape and music by Nichola Scrutton, lighting by Mike Brookes; and original film projected onto the bottom of the pool by Nick Millar and Minty Donald, who is also the designer. The dramaturg for lifeguard is Rob Drummond.

lifeguard explores how vital and life-affirming swimming is as a  life-saving, and health-promoting activity and how emotionally and psychologically ‘therapeutic’ water is. It also explores how water can be life-threatening and how much we fear it.

Govanhill Baths, a Edwardian swimming pool and wash house, was closed 11 years ago and is now looked after by Govanhill Baths Community Trust whose aim is to preserve and conserve the baths for the public benefit.

The National Theatre of Scotland and The Arches are reinstating the training pool for the purpose of this production. The production will also include other swimmers, some of who will have learned to swim in Govanhill Baths during the course of rehearsals.

An exhibition entitled Water Water Everywhere will also be on display in the baths for the duration of lifeguard. This installation has been created by the local community, including St Bride’s Primary School, Cuthbertson Primary School and Govanhill Voices community choir, working with the National Theatre of Scotland.

“Since my childhood, I have always been strangely drawn to, and fascinated by, swimming pools. I love swimming and the sensation of my body being buoyed up by the water and I find it thrilling to watch other bodies – diving, cutting through the surface and especially moving underwater, always graceful in their suspension.

“I’m intrigued by the fact that swimming is such a solitary pursuit, but we’re so often doing it surrounded by other people, constantly part of a transient community.

“And I’m attracted to the layers of paradox that co-exist within the environment of a public pool: they contain ideas of both public and private behaviour; they’re intended as centres of pleasure and abandonment, yet they’re also places which are highly regulated and sanitised; they promote a celebration of life and living, yet the risk of drowning and death is an ever pervasive threat. Hence the need for, and constant presence of, a vigilant lifeguard.”

Due to a limited capacity audience, there are a limited number of press tickets available.

Adrian Howells is a Glasgow-based performance-maker who creates intimate theatrical experiences in non-traditional performance spaces, often in a one-to-one, autobiographical, or confessional context. He is artist-in-residence at the Arches for the next two years and will be collaborating with TouchBase, Sense Scotland, to create work around ideas of touch and tactile communication.

He is also currently an Honorary Research Fellow at the University of Glasgow.  His work has been presented in Japan, Singapore, Israel, Canada, Germany, Spain, Italy and Ireland, as well as at many UK festivals.

In 2011, his Edinburgh Festival Fringe show at the Point Hotel, Edinburgh ‘May I Have The Pleasure…?‘ which was presented by the Arches, received a Total Theatre Award. His most recent one-to-one work ‘The Pleasure of Being: Washing/Feeding/Holding‘ is a co-production with Harbourfront Centre, Toronto, and was presented at an exclusive One-On-One Festival at BAC in both 2010 and 2011 and by the Arches alongside ‘May I Have the Pleasure…?’ at the Edinburgh Festival Fringe 2011.

Mike Brookes is an award winning artist, director and designer, whose work has always bridged media.

He co-founded the performance collective Pearson/Brookes with Mike Pearson in 1997, most recently co-creating their acclaimed Coriolan/us for National Theatre Wales and the RSC.

He is currently developing a long term collaborative practice with Spanish artist Rosa Casado, producing live art and gallery works under the umbrella title Some things happen all at once, some things happen more slowly.

In 2007, he was appointed Creative Research Fellow within Aberystwyth University. Other ongoing collaborations include companies such as Quarantine and Untitled Projects.

Minty Donald is an artist whose cross-disciplinary practice, which evolved from her extensive career as a theatre/performance designer, aims to make an intervention into our relationships with the spaces and places we build and inhabit. Recent work includes Bridging Part 1, 2010 and High-Slack-Low-Slack-High,2012. Minty is a lecturer in the School of Culture and Creative Arts, University of Glasgow.

Jane Mason creates work under her own name (Singer, Come on Sun) alongside choreographing in various collaborative contexts with companies such as Lone Twin and Quarantine.

She is currently developing a new work Life Forces and collaborating with film maker Rachel Davies Film on The Tree, for 2013.

Nichola Scrutton is a sound artist and composer with particular interests in the voice as a medium in live performance and acousmatic composition, site-specific installation and interdisciplinary collaborations across all art forms. Recent projects include Lateral (2012), Songs for a Stranger (2011) and HumDrum (2011). Projects in development include works for Final Fling’s Day of the Dead Festival, and a new live, interactive vocal work exploring the idea of ‘audio drama’.

Rob Drummond is a playwright and performer. His recent work includes Rob Drummond: Wrestling and Bullet Catch. Rob is currently developing work with the NTS, the Traverse and BBC Radio Scotland.

He was writer on the NTS Transform Caithness project, writer and director on the first Allotment project and developed his own show Mr Write with the new work department. In 2012 Rob will be developing work with the Oran Mor, BBC Radio, the Traverse and the Arches.

He is currently under commission to write a new, full-length play for the National Theatre of Scotland and his theatrical magic show, Bullet Catch, has just played at the Traverse during the fringe.

Audience info: Audience members may get wet. They will be invited to change into their swimsuit or other appropriate poolside clothes prior to the performance. They will be provided with a clean t-shirt, towel and flip-flops. Safe, secure changing rooms are available and staffed during the performance. Changing facilities are available from 7pm. Audiences are asked to arrive in good time to change ready for a 7.30pm start.  Valuables/bags/coats etc will need to be left with an attendant in the changing room and will be supervised at all times. Latecomers can’t be admitted. Lifeguard is suitable for everyone 12 plus.

1. The National Theatre of Scotland is supported by the Scottish Government. Since its launch in February 2006, the National Theatre of Scotland has been involved in creating 181 productions in 156 different locations. With no building of its own, the company takes theatre all over Scotland and beyond, working with existing and new venues and companies to create and tour theatre of the highest quality. It takes place in the great buildings of Scotland, but also in site-specific locations, airports and tower blocks, community halls and drill halls, ferries and forests. The company has performed to over 770,000 people, across three continents.

2. The Arches, one of Europe’s leading cultural venues, is both an arts receiving and production house with an international reputation as an exciting hub of ground-breaking creativity. Housed  within seven Grade A listed Victorian railway arches in Glasgow city centre, the venue presents a year-round programme of theatre, performance, dance, visual art, live music, corporate events and club nights.

The programming team employs calculated risk-taking in all of its creative decisions, nurturing emergent talent and rewarding bold approaches with a supportive environment for further innovation. The last few years have seen ground-breaking artists and companies such as The TEAM, Derevo, Ann Liv Young, Ontroerend Goed, Akhe, Taylor Mac and Tim Crouch amongst others perform in the venue.

In the last few years, the Arches presented a programme of work at its own Edinburgh Festival venue for the first time (featuring Adrian’s one-on-one show Footwashing for the Sole, which won a Total Theatre Award) and the phenomenal Trilogy by Nic Green picking up a Fringe First, Herald Angel and Total Theatre Award.

3. Govanhill Baths Community Trust, Govanhill Baths was closed in 2001 and after 11 years of community struggle was re-opened by the Trust in February 2012 with the launch of the first phase of its conversion to a Wellbeing Centre.

This will include the original three swimming pools and a range of other recreative, educational and health facilities including a gymnasium, an arts centre, a theatre/performance/conference and market hall space (in the original ‘Steamie’), a sauna and Turkish bath and a roof-top garden.

It is planned to re-open the small learning/toddlers pool early in 2012.

Details of the Trust’s work can be found at, www.govanhillbaths.com