Media Release: The National Theatre of Scotland brings back its fabulous, festive offering – A Christmas Carol 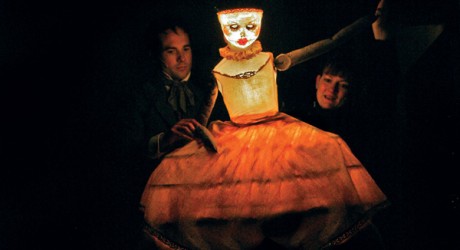 THE National Theatre of Scotland and ON at FIFE present

THE National Theatre of Scotland is delighted to be bringing back the company’s fabulous, festive offering, A Christmas Carol by Charles Dickens, adapted, directed and designed by Graham McLaren.

The production will be presented in an intimate and specially crafted performance space at the Old Kirk, Kirkcaldy, from Friday 7 December to Saturday 30 December, 2012.

Benny Young will return to play Scrooge and will be joined by three of the original cast and puppeteers; Stephen Clyde, Josh Elwell and Beth Marshall and National Theatre of Scotland new-comer, Stuart Angell. Originally penned in 1843 as a novella, A Christmas Carol, was an instant success and Dickens’ redemptive tale of Scrooge, Jacob Marley and the ghosts of Christmas’ Past, Present and Future, has long become an enduring Christmas favourite.

The National Theatre of Scotland’s production will bring Dickens’ classic Christmas fable to life for contemporary audiences with sinister life-size puppets and live music, played out in an unique setting. This spooky and original reimagining is recommended for everyone aged eight-plus.

The National Theatre of Scotland’s pop-up theatre production of A Christmas Carol had its debut run in Govan Town Hall, Glasgow in 2011.

It garnered five-star reviews, critical acclaim and two awards at the Critics Award for Theatre in Scotland ceremony earlier this year, in the categories of Best Ensemble and Best Production.

The venue for this year’s production will be the Old Kirk, the oldest building in Kirkcaldy.

This ‘B’-listed parish church was bought by the Kirkcaldy Old Kirk Trust in 2011 to preserve its use for the local community and it now exists as a concert hall, community resource, heritage centre and continues to be a place of worship.

“By turns delightfully comic and boldly grotesque, the National Theatre of Scotland’s first Christmas show deserves to be remembered as one of the classiest pieces of theatre to have been staged in Scotland, not only in the winter season, but at any time of year.” The Telegraph *****

A Christmas Carol is the final production from a season of work presented by the National Theatre of Scotland in Fife and is part of an ongoing relationship with ON at FIFE.

This autumn/winter programme will see Count Me In (written and performed by Gary McNair), Jump (an ambitious, large-scale community-led project involving Scottish secondary school boys and Parkour, French free-running and hip-hop storytelling) and the Citizens Theatre’s Yellow Moon and The Monster in the Hall (written by highly-respected playwright and theatre director, David Greig) performed throughout the Kingdom in local schools and community centres.

This production has been made possible by the generous support of Kirkcaldy 4 All, The Fife Council Strategic Events Investment Programme and Fife Council Kirkcaldy Area Committee.

Graham McLaren is an associate director at the National Theatre of Scotland. Graham’s production of Great Expectations will tour this autumn prior to a West End run in London.

His acclaimed production of Men Should Weep enjoyed a sell-out run at the Citizens Theatre and a successful Scottish tour in 2011.

He is a Glasgow-based theatre artist who has previously been artistic director of Theatre Babel, which he founded and artistic/associate director of Perth Theatre.

He is currently associate artist at Necessary Angel, a Toronto based theatre company where his recent work, Andromach, premiered at the Luminato Festival in 2011.

Gavin Glover has previously worked with the National Theatre of Scotland on Peter Pan.

Gavin is director of Potato Room productions, a puppet company for grown-ups. He was a founder member of FaultyOptic: Theatre of Animation and productions for the company include Dead Wedding (Manchester International Festival), Horsehead, Licked (with Opera North), Soiled, Snuffhouse Dustlouse, Tunnelvision and Bubbly Beds.

Benny Young takes on the role of Scrooge again. He recently performed in the National Theatre of Scotland/Royal Lyceum Theatre, Edinburgh’s, production of 27 and other work for the National Theatre of Scotland includes The Wheel (The Traverse at the Edinburgh Festival Fringe); Be Near Me (with Donmar) and Six Characters in Search of an Author (with Royal Lyceum, Edinburgh/Citizens, Glasgow). Other theatre credits include The Grapes of Wrath (Chichester); The Tobacco Merchant’s Lawyer (Tron/Traverse); Six Acts of Love; The Drawer Boy (Tron); Night Time (Traverse); Hughie (Arches); The Crucible; A View from the Bridge; Hobson’s Choice (The Touring Consortium) and The Iceman Cometh (Old Vic). Television and film work includes Scottish Killers; Waking The Dead: Sins of The Father; Spooks; Talk to Me; Taggart; Coronation Street; Boon; Playing the Field; The Funny Man; The Bill; Between The Lines; Doctor Finlay; Chariots of Fire; Out of Africa and White Nights.

On the day sales: All days seats should be purchased from the Adam Smith Theatre box office. Pre-paid tickets should be collected at the venue.

To join in the conversation about the show please use #NTSChristmasCarol

1.  The National Theatre of Scotland is supported by the Scottish Government.  Since its launch in February 2006, the National Theatre of Scotland has been involved in creating 181 productions in 156 different locations. With no building of its own, the company takes theatre all over Scotland and beyond, working with existing and new venues and companies to create and tour theatre of the highest quality. It takes place in the great buildings of Scotland, but also in site-specific locations, airports and tower blocks, community halls and drill halls, ferries and forests. The company has performed to over 770,000 people, across three continents.

2. ON at Fife is Fife’s largest independent arts organisation, promoting arts, culture and entertainment across the region.  They currently operate four theatres, as well as staging a diverse range of events around Fife. They create brand new work with some of Scotland’s best contemporary theatre companies, artists and performers, as well as providing a crucial role in supporting local arts organisations and groups. As of October 2012, ON at Fife will become part of the new Fife Cultural Trust which will manage more than 65 venues, including libraries, museums, galleries and the Fife Council Archives Service. ON at Fife’s theatres are Adam Smith Theatre, Kirkcaldy; Carnegie Hall, Dunfermline; Lochgelly Centre, Lochgelly and Rothes Halls, Glenrothes. www.onfife.com

3. Kirkcaldy 4 All aims to deliver a series of projects, services and events within the Town Centre that will raise the quality of experience for businesses, their customers and visitors to the town. Allied to this is a desire to promote Kirkcaldy Town Centre as a place where people want to work, shop and spend their leisure time in a welcoming environment which is customer focused and investment friendly.

4. The Fife Council Strategic Events Investment Programme provides financial support for the delivery of strategic events in the Kingdom which have the capacity to generate significant economic impacts and raise the profile of Fife on the national and international stage.

5. Kirkcaldy Old Kirk Trust is a registered charity, formed by a group of local people with the aim of preserving the 800-year old heritage of Kirkcaldy Old Kirk and maintaining it for community use. The history of the town and its famous folk are contained here – Adam Smith was baptised in the church. Beside the historic 15 century bell tower with breathtaking views over the town and the River Forth, there is a beautiful 1807 modernly equipped 300-seat auditorium with fine acoustics particularly for music. The Trust recently celebrated its first year of successful operation of the Old Kirk as a concert venue, used by Fife Opera, Opera Bohemia, Kirkcaldy Orchestral Society, Dysart Colliery Silver Band and choral groups such as Chansons and bel canto Voices; as a film venue for the local YMCA production of “Vamplifier” ; as conference venue for the Adam Smith Global Foundation Colloquium; and for heritage activities, community events and weddings. Full disabled access from Church Lane. Further information at www.kirkcaldyoldkirktrust.org.uk

MEDIA RELEASE posted by the National Theatre of Scotland. You too can post a media release (aka press release) on allmediascotland.com. For more information, email here.