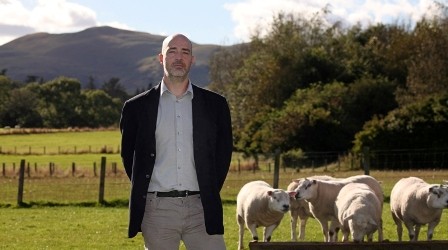 Dr Michael Fontaine, from Moredun Research Institute in Penicuik, was yesterday (27.09.12) announced the 2012 winner of the annual Converge Challenge at an event addressed be Mike Russell MSP, Cabinet Secretary for Education and Lifelong Learning.

Michael will benefit from £25k cash and £25k in-kind support from the private sector, the biggest prize fund of its kind in Scotland. He beat off tough competition from a record 50 applicants from 14 universities and research institutes across Scotland.

Michael’s research group has developed a platform technology for the creation of new, efficacious vaccines for bacterial disease of animals, with the potential to license them for humans.
The team has generated proof of concept data supporting the technology’s use in sheep, and a second vaccine for pigs has already been tested.

Work has already begun on vaccines for horses and cattle.

Michael estimates that the animal health market is worth $5billion (USD) globally. He plans to establish a company to further develop a number of products.

Second and third place winners are Dr Ekaterina McKenna from the University of Glasgow, who plans to create a new bio-nanotechnology company in Scotland to assist in areas such as genomic disease screening, and Professor Derryck Reid from Heriot-Watt University, whose spin-out business, Chromacity, will help scientists and researchers involved in biological imaging.

Converge Challenge, run by Heriot-Watt University, gives students and members of staff of any Scottish university the chance to develop the commercial potential of their inventions with a six month-long series of business mentoring and training, before being short-listed for the final prize.

He said: “Universities and the businesses that they nurture have a crucial role in delivering sustainable economic growth and maintaining Scotland’s enviable reputation in world-class research.

“This programme can help catapult the most promising fledgling entrepreneurs towards commercial success and ensures the Scottish economy benefits from the innovative work carried out in higher education institutions across Scotland.

“My congratulations go to Michael for what looks like a genuinely innovative project and I wish all those who took part the very best of success.”

Professor Steve Chapman, principal of Heriot-Watt University, said: “As rising numbers of university spin offs are created, the growth of Converge Challenge is further evidence of the entrepreneurial spirit and research excellence that thrives in Scottish higher education.

“We look forward to seeing all 2012 Converge Challenge finalists use their expertise and commercial acumen to launch and grow their businesses.”

Michael Fontaine said: “The Converge Challenge process has been an incredible experience that has set me, and I’m sure the other finalists, well on the way to creating a successful SME.

“The training process designed by Heriot-Watt University includes plenty of interaction between participants as well as direct support from mentors. The result is an intensive master class in business management that really helps researchers make that leap from academia to the commercial world.

“Having gone through Converge Challenge, and with the £50,000 support package, I’m now looking forward to becoming/ creating another Scottish start-up success story.”

In addition, the Principal’s Product Challenge, which looks for innovation, inspiration and intelligence, was introduced this year and attracted 22 applications from eight universities. This prize went to Paul Brennan from University of Edinburgh for his surgery simulation product idea.

According to the Higher Education Statistics Authority, university research led to the creation of 184 spin-offs in Scotland in 2010/11, up from 74 in 2008/9.
-ENDS-

2. Since first launching in 2010, Converge Challenge has:
• Received over 130 applications from nine universities across Scotland (50 in 2012, an 18 per cent rise on 2011)
• Trained over 80 research entrepreneurs
• Over 1,400 staff and students attended associated seminars and workshops
• Supported ten companies into commercial trading