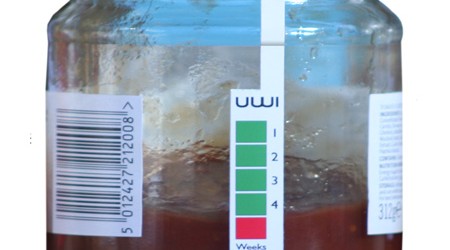 AN ingenious Scots invention has received over half a million pounds of fresh investment, which is expected to propel the start-up into the big league.

The UWI Label, headed by inventor, Pete Higgins, warns when products are about to expire and is set to revolutionise safety standards in sectors as diverse as medicines, aerospace, cosmetics, food and drink.

It has now received a significant tranche of new funding, further cementing 2012 as a breakthrough year for the firm, bolstering its already impressive credentials and past achievements.

Scottish Enterprise’s Scottish Investment Bank has invested £250,000 in the UWI Label through its Scottish Seed Fund, in addition to £254,000 secured from a US private investor syndicate alongside £68,000 received from private UK investors.

Investment in the UWI Label from The Scottish Seed Fund is the maximum single deal value possible from the fund and the first time this level of investment has been granted in one instalment.

Kerry Sharp, acting head of the Scottish Investment Bank, said: “Scotland continues to produce innovative new technologies with global appeal and the UWI Label is the latest example of an ambitious early stage start-up company with significant potential across a wide range of industry sectors.

“We are pleased to be supporting the technology through our Scottish SEED Fund which is designed to support the development of Scotland’s private sector SME funding market to ensure that early stage businesses with growth and export potential have adequate access to growth capital.”

Last year, UWI received its first round of investment of £50,000 from an ‘angel investor’ that was used in conjunction with £70,000 received from Scottish Enterprise’s SMART:SCOTLAND Feasibility Fund to develop sample demonstrators. The firm then were the winners of the coveted ‘Barclays Take One Small Step’ competition with the £50,000 prize allowing Pete and his team to accelerate development of the UWI Label.

The UWI Label was again recognised in February this year when it won the top prize for innovation at the Scottish Enterprise Life Science Awards – one of the biggest accolades in the scientific sector.

The company recently secured $400,000 (£254,000) from AeroDen – a US private investor syndicate, which includes Scots-born businessman, Douglas Cribbes, who was appointed chair of UWI Technology last year.

This appointment was a huge coup for the firm as Douglas brings with him a wealth of experience in the aerospace sector as the President and CEO of Fort-Worth based Texas Aero Engine Service LLC (a joint venture company between Rolls-Royce and American Airlines).

Douglas said: “AeroDen and its associate investors see great potential in the UWI Label and we believe it is a great technical solution for a number of problems the Aerospace industry faces.

“We were also driven by the seemingly endless potential the product has in food, beverage, pharmaceuticals, health care and life sciences.”

It was through Scottish Enterprise’s GlobalScot mentoring and support scheme, which sees successful business figures across the globe help nurture and develop Scottish business talent, that Pete was initially introduced to Douglas Cribbes.

In addition to AeroDen and Scottish Enterprise’s investment, the UWI Label has raised a further £68,000 through two UK-based private investors with links to AeroDen, bringing the total investment for this round to £572,000.

Earlier this month, Pete visited the US on a high profile business tour after winning a place in a prestigious Europe-wide competition run by Climate-KIC, part of the European Institute of Innovation and Technology.

Pete said: “Our visit to the US provided an incredible platform for us to raise awareness of the product and put us in front of some high profile US investors along with potential customers and development partners, which we hope proves fruitful in the long-term.

“In what has already been an incredible year for us, this latest investment win proves that people recognise the potential of the UWI Label and it is testament to the hard work of our team that we have reached this stage.

“Scottish Enterprise has been key to our successes thus far and this assistance cements their belief in us, which is a huge honour for us.

“Appointing Douglas Cribbes as chairman last year has been a huge success for the UWI Label and we can only thank him for his continuing support in our invention and support with AeroDen’s investment.

“The money raised through Scottish Enterprise and AeroDen is a huge boost for our product, which will accelerate its development greatly, and we believe it will project us into the big league.

“Specifically, it will allow us to manufacture working samples by first half of 2013 which will then allow our interested parties to test the labels for themselves as well as attending global trade shows to market the UWI Label further. Additionally, we are looking to add to our management team and support staff to bring further expertise to the company.”

UWI Label inventor, Pete Higgins, was inspired after he almost served out-of-date mayonnaise – which can cause chronic sickness and diarrhoea – to his young son. He was determined to come up with a solution to protect health, reduce waste and save money.

After coming up with the invention five years ago, Pete gave up his job and ploughed his life savings into pursuing the development of the technology. This has included working with a team of scientists at Heriot-Watt University as well as a mass production development partner to develop the prototypes.

Areas where the UWI Label is stimulating interest include the life sciences and medical sectors, aerospace, automotive, cosmetics, veterinary as well as the food and drink industries.

Pete believes the UWI Label will become the de-facto standard for time based safety and regulatory compliance in health and many industry and consumer product sectors.

The system is triggered as soon as packaging is opened and begins a countdown to show exactly when a product’s ‘Use Within’ period expires – showing green while the product is safe and red when it is not.

More information about the UWI Label can be found at www.uwitechnology.com.