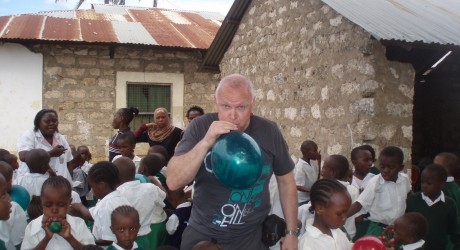 BRIAN Seenan, founder of Printerwise, an Aberdeen-based family business that specialises in helping people save money by buying the right printers and using the right cartridges, is not only passionate about helping local people but also those further afield.

On a holiday to Kenya with his wife two years ago, he discovered a fledgling school in Ukunda, a village 30 miles south of Mombasa.

After meeting the children and their dedicated teachers, Brian and his wife, Elspeth, decided they wanted to make a difference.

They didn’t want to just give hand outs; they wanted to join in the way the community was helping themselves.

Sadly, Brian’s wife died earlier this year, but, in her memory, he returned to Ukunda with a friend for three weeks.

Knowing that stationery was desperately needed, Brian replaced his own luggage with pens and pencils and put various goodies in his hand luggage, including balloons – something that many of the kids had never seen.

“The look on the kids’ faces when they realised they would actually have their own pencil and a balloon was just priceless,” according to Brian.

Brian – together with head teacher, Carol – then came up with the idea of building desks, as many of the kids sit on the floor.

A mango tree was sawn into rough sections and Brian, together with a local carpenter and his son, built 13 desks from the tree for the kids. The tools provided by Brian are now being used by the carpenter’s son, giving his family a new source of income.

Brian’s friend, Anne, took on the task of making lunch for the 240 kids over a huge open fire in the sweltering kitchen without any water or electricity.

With just 20 Euros, which had been kindly donated, all the kids enjoyed meat, cabbage, kale and onions for their lunch the next day instead of their usual gruel.

“The whole village was talking about it. It just shows how a little money property spent can make a huge difference,” says Brian.

Even more talked about were all the photos that Brian had taken and got laminated for the kids – a rare treat indeed as few of the children had even seen pictures of themselves.

Brian will be returning to Africa next year and his daughter, Laura, is planning to start fundraising here in the UK for the school.

“There is a balance to be struck between going out there and using the money to benefit the school, especially as the money is carefully spent,” says Brian.