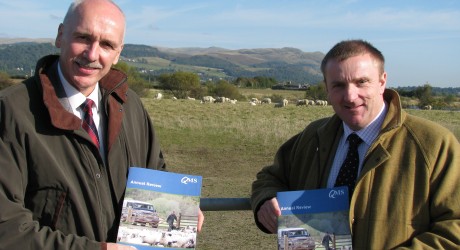 DESPITE the prospect of a difficult winter ahead for Scottish livestock producers, the industry looks set to move into 2013 in good shape, according to Jim McLaren, chair of Quality Meat Scotland.

Speaking at the launch of QMS’s Annual Review 2011/12 in Stirling, Mr McLaren said beef, sheep and pig farmers are looking at some difficult months ahead with a shortage of good quality silage and soaring straw and protein prices.

However, he emphasised that the Scottish red meat industry had numerous reasons to feel confident about the future and proud of its brands – Scotch Beef, Scotch Lamb and Specially Selected Pork.

“We are in a strong position to take advantage of increased demand for quality red meat from a growing population and an eventual upturn in the global economy.”

Figures from the British Cattle Movement Service (BCMS) and Scottish June census show calf numbers have stabilised and over the past 12 months have increased slightly despite reduced cow numbers.

Added McLaren: “What this suggests is that those who have left the business were among the less efficient producers.

“This puts us in a strong position in terms of productivity and animal health. However, it is important producers continue to take advantage of opportunities to further improve efficiency.”

Although the decline in sheep numbers has contributed to improved farmgate prices and margins for sheep farmers there is little evidence yet of a re-building of flock numbers, continued Mr McLaren.

Mr McLaren observed that while these improved farmgate prices have helped to improve producers margins our red meat processors are feeling the squeeze.

“During the first 18 months of my role as chair, I have made it my priority to meet with and listen to representatives from different parts of the red meat chain in Scotland.

“There is no doubt processors are enduring a ‘pincer effect’ as a result of tight supplies of raw material and a grocery sector which is feeling the pain of a very difficult economic climate.

“We have repeatedly emphasised the importance of critical mass to the processing sector – without that many are struggling to make a decent margin, never mind finding the capital they need to reinvest.”

And Mr McLaren observed the grocery scene continues to be challenging with a general lack of confidence among consumers about their financial status.

“The latest figures we have from Kantar Worldpanel reveal that 48 per cent of consumers are finding it harder to meet their monthly budgets than a year ago.

“The results also show that 79 per cent of consumers expect their income to remain static or to fall over the next year.”

One of the consumer trends that research commissioned by QMS’s marketing team has identified is that of ‘Discounter Chic’.

Mr McLaren said it is important that QMS continues to develop marketing campaigns on behalf of the Scottish red meat industry which are developed with strong insight about consumer trends.

QMS chief executive, Uel Morton, emphasised that delivering value for money remained core to every activity the organisation undertakes on behalf of the industry.

“Another important part of our strategy is securing additional financial support for the Scottish red meat industry. During the past year QMS secured almost £900,000 in grants for work on behalf of the industry.

“It is worth pointing out that for each £1 QMS spends on funding research and development projects £10 is invested as a result of staff working to lever financial support from other sources.”

Producers who are members of the quality assurance schemes will receive copies of the QMS Annual Review 2012 this month. To minimise costs, it is being posted with an SFQC mail-out.

The Review is also available to download by visiting www.qmscotland.co.uk or by calling 0131 472 4040.