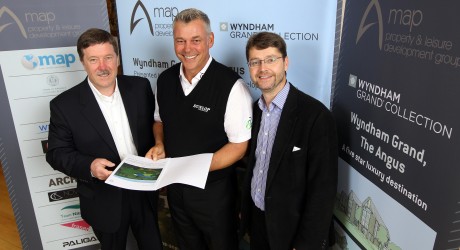 A SCOTTISH firm is working with this year’s Ryder Cup vice-captain and champion golfer, Darren Clarke, to create his first signature course in Scotland, which promises to be one of the best courses in Scotland.

Team Niblick, a specialist golf course design and build firm based in Inverurie, Aberdeenshire, has been working closely with the Northern Irishman to create a new, world-class 18-hole championship course as part of a luxury five-star resort being built near Carnoustie next year.

The course being created at Wyndham Grand The Angus has been designed by 2011 Open  champion, Darren Clarke, in collaboration with Graeme Webster of Team Niblick, who is one of Scotland’s most respected golf course architects.

Mr Webster said: “It’s been exciting to work with Darren as he and I share similar views on what makes a golf course, challenging, rewarding, exciting, fun and thoughtful to play.

“I’ve been working very closely with him since the initial site work. I always had an ambition to meet him and I was not disappointed as, in person, he lives up to his image as a larger than life character.

“Darren brought his vast experience as a professional golfer to our discussions. His focus is on risk and reward, strategic shot choices and, surprisingly for a man that can propel the golf ball huge distances, his vision was not on the total length of the golf course.”

Team Niblick, launched in 1991, is a team of specialist golf course designers and construction experts. The firm, led by Graeme Webster, has been involved in the creation of a number of Aberdeenshire courses, including Meldrum House, near Oldmeldrum, Inchmarlo, near Banchory, and the Aspire Golf Centre in Deeside, which is now the Paul Lawrie Golf Academy.

Further afield, they have worked on numerous other courses including Kings Acre and Baberton, near Edinburgh, Kingsfield at Linlithgow and Eastwood and Williamwood in Glasgow, as well as courses in Scandanavia and Spain.

Wyndham Grand The Angus, being developed by MAP property & leisure developments (mappld), will be constructed on a prime elevated position adjacent to the Forbes of Kingennie Country Resort in Angus. Construction of the golf course and golf academy is set to begin in Spring 2013 with completion estimated in autumn 2014, to coincide with the Ryder Cup being played at Gleneagles.  The full resort is estimated for completion 2015.

Mr Webster says working with the natural topography of the land during the design process has been inspiring. The commanding location will allow golfers to enjoy sea views towards Carnoustie, the Tay Bridge and Fife.

Mr Webster continued: “Darren and I have created a golf course that will get strategically harder in shot selection as the golfer gets better. Golfers as talented as Darren will often choose the heroic route and when the shot comes off they will be putting for eagles and birdies but, those slightly less gifted will still face a shot selection challenge more suited to their ability.

“Ultimately, we want people to come off the course with smiles on their faces and make it a pleasurable experience that they want to repeat.”

Mr Clarke said: “The landscape at the location of Wyndham Grand The Angus is absolutely perfect for the creation of a world class championship golf course.

“I’ve been working very closely with the talented Team Niblick golf course architects to develop an exciting design which will result in an outstanding golfing experience.

“A successfully-designed course leaves you with a fantastic feeling coming off the course and we wanted players to enjoy that same feeling on every single hole.

“This will be a world-leading resort in the heart of the home of golf and I cannot wait to strike the first ball.”

In the next month the greens and tees will be set out and Darren and Graeme will walk the course before making final adjustments to the plans prior to the build starting next year.

Team Niblick has aspirations that the golfer’s new signature Scottish course might be selected as a tournament destination in the future. After all, it has been carefully designed to accommodate tournament vantage points and the safe movement of thousands of spectators, therefore according to the design team, it would be a perfect location for a future Ryder Cup or Scottish Open.

MEDIA RELEASE posted by Frasermedia. You too can post a media release (aka press release) on allmediascotland.com. For more information, email here.