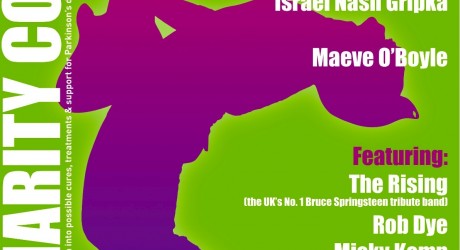 ROCK superstar, Bruce Springsteen, might not be on the bill but he is a big-time supporter of a charity concert set for Glasgow next month.

The Scottish leg of the Light of Day (LOD) charity concerts, staged in aid of Parkinson’s and Revive MS Support, takes place at Oran Mor on Friday, November 23.

This year’s line-up features Joe D’Urso, Israel Nash Gripka, James Maddock and Garland Jeffreys from the United State, as well as the Springsteen tribute band, The Rising. Local acts, Maeve O’Boyle and Ryan MacDowell, are also on the bill.

LOD Scotland is organised by city businessmen and keen music fans, Mike Simpson and Graeme Brown, and young entrepreneur, Robbie Lewis, who are committed to establishing the show as an annual event to raise funds for good causes.

“The US-based acts on our bill this year all have close connections to Springsteen who has headlined nine out of the 12 LOD concerts in the States,” said Mike.

“Our first show last year raised £4,000 so it would be great if we could top that this time round.”

‘Light of Day’ is the title of a Springsteen song and a film starring Parkinson’s sufferer, Michael J Fox. The charity was established in 2000 to raise money for the disease after Bob Benjamin, a well-known music figure in the New York area was diagnosed with Parkinson’s.

“We can’t have Springsteen but we do have a great line-up of US and home-grown talent,” said Graeme Brown.

“LOD has been running European tours for several years but last year was the first for Scotland. Although put together at short notice, it was a success so we were determined to have another this year.

“Half the money raised goes to the LOD Foundation and half to local charities in Scotland – Revive MS Support and Parkinson’s.

“It will be a great evening of music for a very good cause.”

Joe D’Urso, on the board of directors for The Light of Day Foundation, is widely praised for making music with passion and for a purpose to help others.

James Maddock is British born and last year NYC’s WFUV 2011 Listener’s Poll named his CD, ‘Wake Up and Dream’, as one of the top albums of the year. The song, ‘Beautiful Now’, co-written with Mike Scott of The Waterboys, was named the No. 9 song of 2011 in the same poll.

Brooklyn-born rocker, the well-connected Garland Jeffreys has sung with Springsteen, and collaborated with Dr John, John Cale and Lou Reed.