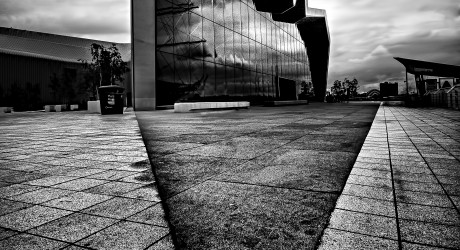 A DRAMATIC picture of The Riverside Museum in Glasgow has taken first prize in an architectural photography contest.

To celebrate the city’s unique architecture, organisers of Doors Open Day and the Creative Mackintosh Festival invited amateur photographers to submit images of Glasgow landmarks for a competition and exhibition.

The winning photograph, depicting the 2011 Glasgow landmark designed by architect, Zaha Hadid, was taken by Surajit Paul from Glasgow.

Attending a reception for the 20 finalists at the Glasgow Art Club on Tuesday evening, a delighted Mr Paul said: “I was given a camera by my wife a couple of years ago and to be honest I have not really entered a competition before. But I am a big fan of Zaha Hadid and I spent a long time getting this picture.”

The list of 50 official Landmarks feature Glasgow’s most iconic buildings from medieval times to the present day and include several buildings by world-renowned father figure of the Glasgow Style, Charles Rennie Mackintosh.

Prizes in the photography included nights in Glasgow hotels, flights to Barcelona with Jet2.com and VIP passes to Glasgow Airport’s first-class lounge.

Susan Garnsworthy, Creative Mackintosh Festival organiser, said: “The standard of the photographs we received was extremely high and we were impressed with the work that was submitted. The photographs have now made a fabulous exhibition which we hope people will enjoy in Glasgow Art Club.”

Around 150 people entered the competition, the best 20 of which are featured in an exhibition at Glasgow Art Club until the end of the month. Thereafter the photographs will be on show to international visitors in the arrivals hall at Glasgow Airport.

Francois Bourienne, commercial director at Glasgow Airport, said: “We are looking forward to exhibiting the work of the winning photographers in our arrivals hall.”

The 20 finalists’ pictures can be viewed at Glasgow Art Club, 185 Bath Street, Glasgow, until October 28.

2. The Creative Mackintosh Festival runs from October 15 to 28 and includes theatre, music, exhibitions and workshops inspired by the work of Charles Rennie Mackintosh. The full programme is available at www.glasgowmackintosh.com

Charles Rennie Mackintosh who lived from 1868 to 1928 and was responsible for numerous influential buildings as well as being famous for interior design with his wife Margaret Macdonald Mackintosh.

Funding for the festival has been sourced from Glasgow City Marketing Bureau, Scottish Enterprise and Creative Scotland which has provided £90,000 to the artists and performers involved.

3. The Mackintosh Heritage Group is a non-profit making organisation, initially established in 1982 and formally constituted in 2008. Its mission is to promote and raise awareness of the unique Mackintosh heritage. The group is made up of representatives from the principal Mackintosh properties and collections in Glasgow, with one key property in Argyll and Bute.  These include: The Mackintosh Church at Queen’s Cross, Kelvingrove Art Gallery & Museum, Martyr’s School, Scotland Street School Museum, Ingram Street Tearoom Interiors, The Glasgow School of Art, House for an Art Lover, The Lighthouse, The Hill House, The Mackintosh House at The Hunterian, The Willow Tearooms and Glasgow Art Club.

4. Funding to stage a ‘Creative Mackintosh’ programme during 2012, has been provided by Creative Scotland, as part of the Year of Creative Scotland; Glasgow City Marketing Bureau and Scottish Enterprise.

5. Glasgow City Marketing Bureau (GCMB) is the official destination marketing organisation (DMO) for the city of Glasgow. As custodian of the Glasgow: Scotland with style brand, GCMB works with partners, stakeholders and businesses to position and promote Glasgow across national and international markets as one of Europe’s most vibrant, dynamic and diverse cities in which to live, work, study, invest and visit. For more information, visit: www.seeglasgow.com

6.  Creative Scotland is the national development agency for the arts, screen and creative industries. It will invest almost £60m of Scottish Government and National Lottery funding during 2011-2012. www.creativescotland.com. The Year of Creative Scotland began on January 1, 2012 and is a chance to showcase, celebrate and promote Scotland’s cultural and creative strengths on a world stage. Through a dynamic and exciting year-long programme of activity celebrating our world-class events, festivals, culture and heritage, the year puts Scotland’s culture and creativity in the international spotlight with a focus on cultural tourism and developing the events industry and creative sector in Scotland.

Creative Scotland has invested over £8m National Lottery funds into a programme of activity to support the year that shows Scotland’s creativity at its best: contemporary, international and reflecting the joy that a vibrant cultural life brings to our communities.

More information about the programme can be found at: http://www.creativescotland.org.uk/explore/2012-2014/year-of-creative-scotland-2012