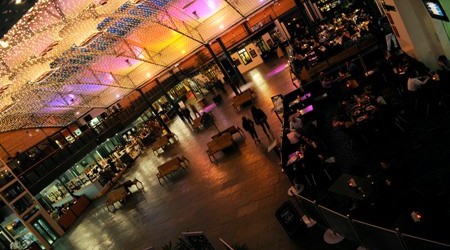 YOU are invited to Merchant Square, Candleriggs in Glasgow’s Merchant City at 12 noon on Wednesday 7th November when it plays host to a special Celtic Barça Fanzone.

More than 500 Barcelona fans will be bussed directly from the airport to Merchant Square, where they will be piped into the heated Victorian courtyard.

Live entertainment for both sets of fans to enjoy in the lead up to the big match will include a ceilidh with a traditional Scottish band, a Catalan translator, DJ and a traditional Catalan group. The fun kicks-off at 12 noon, with the match itself shown on Merchant Square’s giant screen at 7.45 pm.

In addition to Hoopy the Celtic Mascot being in attendance, the Square’s big screen will be showing old Celtic v Barcelona matches in the run up to the match, while Merchant Square will be decorated throughout with FC Barcelona and Catalan flags.