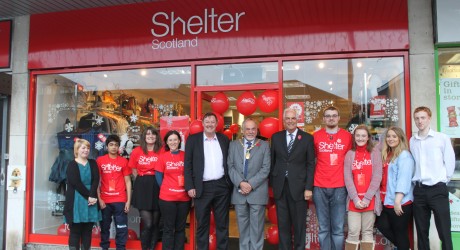 Councillor Alastair Carmichael – who brought along a bag of donations himself – was joined by Councillor Ian McAlpine, Graeme Brown, director of Shelter Scotland, and an army of loyal customers, staff and volunteers who turned out for the official opening.

The new shop on Busby Road is one of 43 nationwide Shelter Scotland shops which together provide vital income for the charity.

Shelter Scotland works to help anyone with housing difficulties, whether they’re homeless, facing homelessness, struggling to pay their rent or mortgage or living in bad housing. Last year, the charity’s free national helpline received 19,000 calls – and that number is rising.

The helpline is funded entirely by voluntary donations from the public, including funds raised from the charity’s shops.

Speaking ahead of the official opening, Councillor Alastair Carmichael, said:

“Shelter Scotland’s on-going campaigning, advocacy and support for those affected by bad housing and homelessness makes a real difference to thousands of families and individuals, including many in East Renfrewshire.

“I’m delighted to open the Clarkston shop and encourage local people to support the charity in their hard work to end bad housing and homelessness for good. A donation, no matter how small, can make the world of difference.

“It costs just £10 for Shelter Scotland to help a family or individual at risk of losing their home through their helpline. We can all help raise such vital funds by donating an unwanted jumper or pair shoes for the charity to sell in its Clarkston shop. I urge people across East Renfrewshire to show their support for Shelter Scotland and help in any way they can.”

“At a time when funding for our national and local services is being cut shops like the one Clarkston are a vital source of income. They help us to run services like our free national helpline which helps thousands of people every year.

“We hope that the people of East Renfrewshire will continue to support Shelter Scotland, because without their help and generosity our fight to end bad housing and homelessness would be so much harder.”

According to Shelter Scotland, the top two reasons why people donate to charity shops are to help people in need and because it’s a convenient way to get rid of items they no longer need. Nevertheless, stock remains one of the most important issues facing its chain of shops.

Graeme Brown added: “If every person in East Renfrewshire donated just one item to a Shelter Scotland shop it would enable us to help hundreds if not thousands of people in housing need. We believe that everybody needs a home. Our work won’t stop until there’s a home for everyone.

:There are 2,665 families and individuals in East Renfrewshire on the waiting list for a home, with 157,000 households on waiting lists across Scotland.:

Shelter Scotland shops are famed for their quality of goods. In the past, the charity has sold a Rolex watch worth over £7,000 for a fraction of the value, as well as regular sales of top brand names including Prada, Dior and Lanvin and quality vintage items.