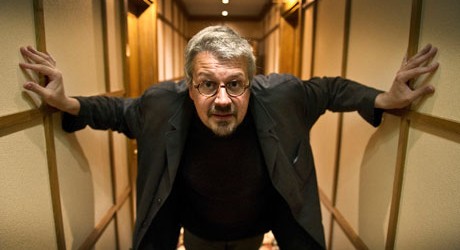 THE award-winning filmmaker, Sylvain Chomet, who lovingly put Scotland and Edinburgh on screen in the animated hit, The Illusionist, after a five-year sojourn in the city, is set to receive an honorary degree from the University of Edinburgh in November.

Chomet who has settled back in his native France and is working on a new live action feature, will have the doctorate bestowed by Sir Timothy O’Shea, vice-chancellor and Principal at a ceremony in the McEwan Hall on 28 November during the run of the 20th edition of the French Film Festival UK of which he remains patron.

The degree ceremony will be followed on 29 November by a civic reception at the City Chambers in honour of the French Film Festival and Chomet, hosted by the Lord Provost, Donald Wilson.

Chomet and his wife, Sally, his producer on The Illusionist, said they were delighted by the honour. “I am looking forward to returning to the city that I grew to love so much during my time there,” said Chomet.

Richard Mowe, a film critic and director of the French Film  Festival, said: “It is wonderful that the city’s most venerable university has seen fit to honour the talents of Sylvain.”

Chomet made his first feature film, Belleville Rendez-vous, in Quebec.

It was a hit on both sides of the Atlantic and secured a couple of Oscar nominations.

Chomet visited Edinburgh when Belleville Rendez-vous screened at the Edinburgh International Film Festival in 2003, and “fell in love” with the city.

Mowe met him at a Quebec cinema event in Paris and urged him to come to work in the city.

Says a spokesperson: “The Illusionist was based on a script that the great French icon Jacques Tati had intended to make as a live-action film with his daughter.

“Tati died in 1982, but Chomet inherited his great ‘lost’ script because Tati’s daughter was so impressed with Belleville Rendez-vous, in which one of the characters watches Tati’s film Jour de Fête on television. The Illusionist, which won a BAFTA prize, was originally set in Prague and the Czechoslovakian countryside, but Chomet relocated it to London, and especially Edinburgh and Mull.”

Chomet managed to find time while in Edinburgh to complete his first live action short film: part of a portmanteau project set around the French capital called Paris je t’aime, with various directors contributing, among them the Coen Brothers, Walter Salles, and Gus Van Sant. It was presented at the French Film Festival in 2007 in the presence of Chomet and Amelie producer Claudie Ossard.

Currently Sylvain Chomet (48) has returned to the City of Light to work on his first live action feature Attila Marcel, a musical comedy set in Paris.

The main character, Paul (Guillaume Gouix), lost both his memory and the ability to speak at the age of two when his parents died.

He lives a monotonous life with his two aunts until he meets Mme Proust. She has an herbal remedy that will allow Paul, now age 33, to travel back to the very beginning of his memory and discover what happened to his parents.

SCREENINGS OF THE ILLUSIONIST

For any further information about the ceremony please contact:

MEDIA RELEASE posted by the Institut francais d’Ecosse. You too can post media releases (aka press releases) on allmediascotland.com. For more information, email here.