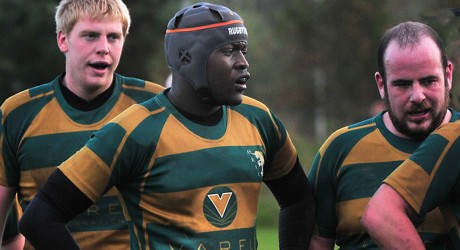 A LEADING rugby team which is sponsored by one of the world’s largest independent suppliers in the global oil and gas drill bit market is on the crest of a wave, enjoying an unbeaten run.

Aberdeenshire RFC – which plays in the RBS Caledonia Regional Leagues and Caledonia League Division 1 – is unbeaten in all competitive games this season having won 11 out of 11 games played so far, including winning the first game in their cup campaign.

In recognition of Aberdeenshire’s successful run, which is only matched by two other Scottish teams, players from the national rugby squad recently dropped in on a children’s coaching session and took questions from up-and-coming local players.

Aberdeenshire RFC is sponsored by Varel International which is headquartered in Texas and operates from locations around the world, including Portlethen near Aberdeen.

The company has a long association with local amateur rugby and also provides sponsorship for the women’s team, Aberdeenshire Quines.

Varel International North Sea manager, Jason Marchant, said: “We are delighted that the team is doing so well and that we have played a small part in making that happen.

“Everyone at Varel International wishes Aberdeenshire RFC all the very best for continued success throughout the remainder of the season.”

For further information visit www.varelintl.com or call the North Sea office in Aberdeen on (01224) 785209.

Issued by Granite PR on behalf of Varel International