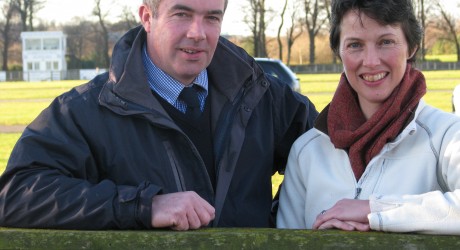 Katie Keiley is a familiar face to sheep farmers in the south west having previously worked for SAC Consultancy in the Stranraer and Dumfries Offices.

She is currently treasurer and promotional officer for the Border Leicester Sheep Society, a role she will continue along with her part time work with the Scottish Sheep Strategy.

Mrs Keiley is married with two small children and is involved with the family farm on a daily basis.

Stuart Annand is a sheep farmer who is married with three children and runs a hill farm near Newtonmore in Perthshire.

He has also had experience of farming in New Zealand and many of the issues the industry in Scotland faces are not too dissimilar to those of the southern hemisphere. Mr Annand brings a different dynamic to the Scottish Sheep Strategy and a very hands-on approach.

He is passionate about all things ‘sheep’ and will be looking at the wider platform rather than just breeding.

The pair were appointed following an open tender process and take over the reins from Rod McKenzie.

“Through EID (Electronic Identification), sheep farmers who are interested in monitoring how individual animals within their flock are performing can do so in a relatively easy way rather than viewing the whole flock on a batch basis,” said Kathy Peebles, QMS livestock development manager.

“The Focus Farm projects have shown benefits to all sectors of the Scottish sheep industry through the use of good performance recorded genetics. Now is the time to make the linkages to ensure a joined-up approach.”

Ms Peebles added: “Only when sheep breeders and feeders monitor the individual animals within their flocks can the passengers (those which are under-performing) be identified.

“The role Katie and Stuart are undertaking will help the industry introduce changes to take these points forward and to support farmers, and groups, through the different stages.”