Media Release: Still time to warm up for St Andrew’s weekend and Hogmanay 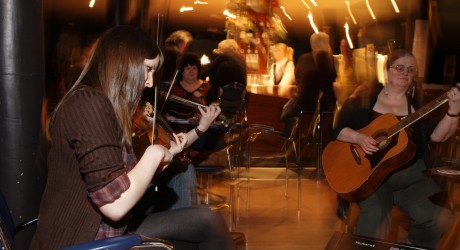 THERE’S still time to get in the party mood for St Andrew’s weekend and Hogmanay with Trad Trails sessions continuing around the country into December.

And new venues joined the project in Autumn, offering of Scottish Traditional music sessions around Scotland. They include The Market Inn (Ayr), The Tam O’Shanter (Dumfries) and The Ardlui Hotel (Loch Lomond), The Glen Mhor Hotel (Inverness) and The Ramnee Hotel (Forres).

Full details of all the venues with session dates and times are available on the website.

Says a spokesperson: “Trad Trails is a joint cultural tourism project between two of Scotland’s most pre-eminent traditional arts organisations, the TMSA and Fèis Rois, funded by Creative Scotland.

“It aims to provide visitors and local people alike with the opportunity to hear live Scottish traditional music in a wide range of venues across Scotland throughout the Year of Creative Scotland 2012.

“The two strands of Trad Trails are a session programme run by the TMSA and a National Ceilidh Trail co-ordinated by Fèis Rois.”

“We were pleased to support this collaboration between Feis Rois and TMSA to promote opportunities across the country for visitors to experience the best of our traditional music in the Year of Creative Scotland.”

The sessions are generally led by musicians booked by the TMSA, but they are free, participatory and anyone is welcome to join in or listen.

For details of other events, sessions and folk clubs happening around Scotland – visit www.tmsa.org.uk/music-events-scotland.asp

Creative Scotland is the national development agency for the arts, screen and creative industries. Our vision is: That Scotland is recognised as a leading creative nation – one that attracts, develops and retains talent, where the arts and the creative industries are supported and celebrated and their economic contribution fully captured, a nation where the arts and creativity play a central part in the lives, education and well-being of our population. www.creativescotland.com

About the Year of Creative Scotland 2012: The Year of Creative Scotland began on January 1, 2012 and is a chance to showcase, celebrate and promote Scotland’s cultural and creative strengths on a world stage. Through a dynamic and exciting year-long programme of activity celebrating our world-class events, festivals, culture and heritage, the year puts Scotland’s culture and creativity in the international spotlight with a focus on cultural tourism and developing the events industry and creative sector in Scotland. More information about the programme can be found at: www.visitscotland.com/creative

The Traditional Music & Song Association (TMSA) of Scotland, set up in 1966, is a membership organisation whose core aim is to foster and promote Scotland’s unique musical traditions. Members include music enthusiasts, amateur and professional performers, tutors, and academics. The TMSA encourages both widespread popular participation and individual artistic excellence. Its branches provide opportunities for universal participation by running festivals, ceilidhs, concerts, workshops and competitions. The branches sustain the specific cultural traditions of their area, as well as those of Scotland generally.

The TMSA believes that grassroots participation in traditional music and song involving all parts of the traditional community is fundamental to the continued authentic voice of our professional performers and to the very cultural identity of Scotland itself.

“Since the first Blairgowrie Festival way back in nineteen when-ever-it-was, when the seeds of the TMSA were sown, there has been a need for a continuity organisation which could hold the long term view of the progressive development of the revival in traditional music and song. I believe that the TMSA have followed and hold this perspective in the accumulated and collective consciousness of the organisation….their consistency has laid a bench mark in both events and other activities for follow on organisations and this underpinning is as vital today as it has been over the 50 or so years and thoroughly deserves support and funding from departments that are within their reach.” Archie Fisher (performer, BBC Radio Scotland ‘Travelling Folk’ presenter and TMSA Patron).

“Traditional music and song comes from the people, belongs to the people and is best cherished and cared for by the people! The Traditional Music and Song Association of Scotland is a grassroots organisation which has played, and which continues to play, a major and vital role in ensuring that Scotland’s musical heritage is preserved, promoted, and celebrated in all its local and national splendour. The TMSA is not the tartan ribbon round Scotland’s musical cake; the TMSA is the cake!” Sheena Wellington (performer – well known for her rendition of ‘A man’s a man for a’ that’ at the official opening of the first Scottish Parliament in 1999, Traditional Arts Consultant and TMSA Patron).

MEDIA RELEASE posted by Voluntary Arts Scotland. You too can post media releases (aka press releases) on allmeidascotland.com. For more information, email here.