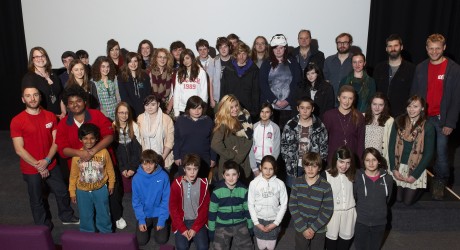 YOUNG people from across the Highlands graced the red carpet at Eden Court on Saturday for the presentation of Dance Leader Awards, Eden Court Film Awards and the premiere of the latest Eden Court CREATIVE Films.

The event celebrated the achievements of young people in filmmaking and dance, through a collection of short films created entirely by members of the venue’s digital media classes and participants in the Scottish Government’s CashBack for Creativity Scheme.

The CashBack programme takes the ill-gotten gains of crime and invests them into community programmes, facilities and activities largely for young people at risk of turning to crime and anti-social behaviour as a way of life.

Projects range from diversionary work to more long-term potentially life-changing intervention projects, which aim to turn an individual’s life around and provide them the opportunity of a positive destination such as employment, education, or volunteering.

Followed by a buffet lunch reception, the screening featured a variety of filmmaking styles, including stop-motion animations and live-action films.

The screening reflected the major focus on Eden Court CREATIVE’s Let’s Make a Music Video project where young people from Fort William, Cannich and Inverness worked with dance, film and music specialists to create their own unique films.

The four year-long programme of events aims to encourage more people to get active and participate in dance, bringing together professional and amateur dancers of all ages to dance in public spaces in towns, villages and cities.

Awards were presented to those who had taken part in both the Dance Leaders Level 1 Award and the Eden Court Filmmaking Award programmes which took place at Eden Court in October.

The five-day courses ran during the October holidays and encouraged people aged 13-18 to learn a new skill or gain a qualification in the arts.

The awards were presented by Scottish BAFTA nominee, Johnny Barrington, who guided the Film Award candidates, helping them to produce a film noir style detective movie which was included in the showing.

Eden Court CREATIVE’s digital artist, Graeme Roger, said: “The screenings of young people’s work at Eden Court is a fantastic experience for them and a fitting reward for all the hard work they’ve done over the past term.

“We’re very pleased to be able to offer young people the opportunity to learn and create with new technologies, as well as have great fun in the process.”

Eden Court CREATIVE’s dance artist, Louise Marshall, said: “It’s great to be getting more young people active on both sides of the camera, and demonstrating the commitment, whether in dance or film, to be receiving these awards.”

Eden Court CREATIVE manager, Kati Kozikowska, said: “The Eden Court CREATIVE Film screening is a brilliant example of the opportunities that are available through the Scottish Government’s Cashback for Creativity and Get Scotland Dancing Initiatives.

“Eden Court CREATIVE is dedicated to providing a wide range of high quality arts programmes for the entire Highland community, and this event celebrates the large number of people we’ve brought together to work on these various projects.

“It’s fantastic to be able to offer these opportunities and continue the work Eden Court is doing to develop dance and digital media education and participation across the Highlands.”

For more information about Cashback for Creativity, Get Scotland Dancing or the Eden Court CREATIVE programme of classes and activites, contact the CREATIVE department on 01463 239 841 or email creative@eden-court.co.uk.