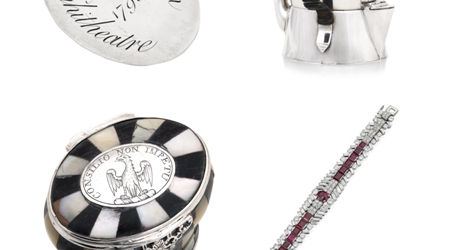 AT 11am on Thursday 13th December 2012 Bonhams will commence its auction of a fine and fascinating collection of jewellery, silver, European ceramics and glass.

The sale will take place at 22 Queen Street in Edinburgh. Featured among the collection are some beautiful pieces of silver from the private collection of the late Johnny Noble of the Ardkinglas Estate.

Says a spokesperson: “John Henry Brunel, the 1st Baronet of Ardkinglas, was considered an art connoisseur and had a sought after silver collection.

“The estate and the silver collection were then passed to his sons and eventually to Simon John (Johnny) Noble, who continued to add to the collection.

“The lots offered at the auction were inherited by a descendant of Johnny Noble. The last time this fine collection of silver was available for public view was in 1959.”

A George III silver medal for the Edinburgh Amphitheatre from the Ardkinglas collection with an estimated value of £200-300. This oval medal could well have been a badge or an entry pass, it is engraved on both sides:

The position of ‘Treasurer’ existed from the mid 16th century until being abolished in 1836 when the role was integrated into that of Paymaster-General. Henry Dundas held the position between 1784 and 1800.

The spokesperson added: “The Argyll is said to have been invented by the 3rd Duke of Argyll (1682-1761). It acts as a gravy-warmer and has been made in many shapes and sizes. Scottish examples are extremely rare and this one is thought to be one of the earliest known.

“This particular style keeps the gravy warm by inserting hot water into the exterior funnel which extends into the false bottom.”

Also from the Ardkinglas collection is the rare 18th-century mother-of-pearl and ebony vase shape snuff mull estimated at £3,000-4,000.

The term, ‘mull’, is from the local dialect for ‘mill’ as some such boxes had a tool to crush the snuff.

This particular mull has a baluster body formed by alternate mother of pearl and ebony staves; the lid with corresponding staves is set with an oval silver plaque which is engraved with a crest and motto.

The motto is ‘Consilio non impetus’ and the crest is that of Agnew, probably Sir Andrew Agnew of Lochnaw, Bart.

Aside from Ardkinglas, there will be many other gorgeous items of jewellery, silver, ceramics and glass available at the auction.

This is a strap bracelet set with a central oval-cut ruby, with two pavé-set diamond sections to either side and flanked by six step-cut rubies, to a further six diamond-set sections.

All of this within baguette-cut and round brilliant-cut diamond borders.

The auction will be held at 11am on Thursday 13th December 2012 at 22 Queen Street, Edinburgh. Viewings take place from Friday 7th December until Wednesday 12th December (including weekends) at the same address.

Images of all lots mentioned are shown above in order of appearance from top left to bottom right.

Bonhams, founded in 1793, is one of the world’s largest auctioneers of fine art and antiques. The present company was formed by the merger in November 2001 of Bonhams & Brooks and Phillips Son & Neale. In August 2002, the company acquired Butterfields, the principal firm of auctioneers on the West Coast of America. Today, Bonhams offers sales through two major salerooms i nLondon: New Bond Street and Knightsbridge; and a further three in the UK regions and Scotland.

Sales are also held in San Francisco, Los Angeles, Carmel, New York and Connecticut in the USA; and Germany, France, Monaco, Hong Kong and Australia. Bonhams has a worldwide network of offices and regional representatives in 25 countries offering sales advice and valuation services in 60 specialist areas.

MEDIA RELEASE posted by Tartan Silk. You too can post media releases (aka press releases) on allmediascotland.com. For more information, email here.