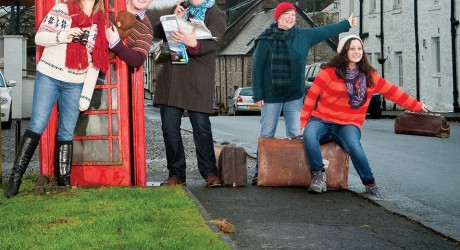 OPERA Highlights celebrates 50 years of Scottish Opera with a retrospective romp through music from some of the company’s most memorable productions.

Sitting alongside familiar favourites – from Verdi’s La traviata, Bizet’s Carmen, Rossini’s The Barber of Seville and Gilbert & Sullivan’s The Gondoliers – will be lesser-known gems mined from the archives, like Bernstein’s Candide, Rimsky-Korsakov’s The Golden Cockerel, MacMillan’s Ines de Castro and Weber’s Oberon.

To complete the celebrations, Opera Highlights will also feature the world premiere of a new piece of music by Scottish Opera’s first Composer in Residence, Gareth Williams, created especially for the tour.

Four singers and a pianist will visit 17 venues across the length and breadth of Scotland, from the likes of Barra, Bathgate and Banchory to Hawick, Tarbert , Killin and many, many more.

The man in charge of putting together the anniversary programme is Scottish Opera Head of Music, Derek Clark.

He said: “Opera Highlights is always a celebration of wonderful music and this year it’s even more special as we’ve been be able to put together a programme which takes a joyful look back at some of Scottish Opera’s own highlights from across our 50 years.

“With such a varied selection of music there is plenty to enjoy whether you’re an opera novice, an opera buff, or anywhere in between.”

This 17-date tour, combined with two tours of La traviata in Autumn and Spring and Scottish Opera’s full-scale productions in Glasgow, Edinburgh, Inverness and Aberdeen, means that for the 50th anniversary season the company will be performing within a 30-minute drive of 90 per cent of Scotland’s population.

3 – The tour of Opera Highlights combined with two tours of La traviata in autumn and Spring, and the company’s performances in the cities of Glasgow, Edinburgh, Aberdeen and Inverness brings a Scottish Opera performance within a 30-minute drive of 90 per cent of the Scottish population during the 2012/13 season.