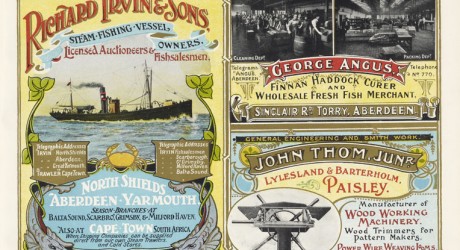 THE global reach of Scotland’s industrial might at the turn of the 20th century is highlighted in a catalogue of exquisite trade advertisements which have now been digitised.

Scotland’s Industrial Souvenir promoted the diverse range of products manufactured in Scotland and shows advertisements for soap, smoked fish and sacking, alongside others for brushes and boilers, heavy engineering and horseshoes.

Most striking is the evident pride that each company took in showcasing their factory buildings: almost every advertisement in the catalogue features full colour drawings of huge sheds and mills, with smoke pouring out of tall chimneys.

The catalogue was published in 1905 and over 6,000 copies were sent to Chambers of Commerce, British Embassies and Boards of Trade in every part of the world. Copies could also be found onboard Cunard passenger vessels travelling as far afield as South Africa and Japan.

The catalogue is now available online as part of the extensive National Collection held by the Royal Commission on the Ancient and Historical Monuments of Scotland (RCAHMS).

It was identified for digitisation by a curator researching Scotland’s industrial past among RCAHMS collection of rare books and manuscripts.

RCAHMS manages a continuous survey and recording programme, photographing the industrial heritage and history of Scotland including buildings on the At Risk register.

A number of the buildings featured in the catalogue are now long gone, have fallen into disrepair, or have been repurposed for other uses.

RCAHMS online database – Canmore – features photographs and records relating to many of them, showing how these industrial sites have changed over the past century.

Commenting on the adverts, RCAHMS head of collections, Lesley Ferguson, said: “From Edinburgh’s breweries, brush makers, glue factories and ironmongers, to fish merchants in Aberdeen and confectioners and jute merchants in Dundee, these beautifully detailed advertisements conjure up the sights, sounds and smells of Scotland’s industrial heyday.

“It is wonderful to think of these catalogues being sent all around the world as a way of promoting the industrial expertise of Scotland at the time.”

RCAHMS has an ongoing programme to digitise rare archive material – like the Industrial Souvenir – and make it available to the public online.

For more information and images please contact Stuart Young/Giselle Dye on 0131 556 0770 or email stuart.young@pagodapr.com or giselle.dye@pagodapr.com

1. RCAHMS is the National Collection of materials on Scotland’s built environment that connects people to places across time. It is the first port of call for information about the built environment of Scotland, from prehistory to the present and records the changing landscape of Scotland and collects materials relating to it, see www.rcahms.gov.uk or visit www.facebook.com/rcahms and follow us on Twitter @rcahms