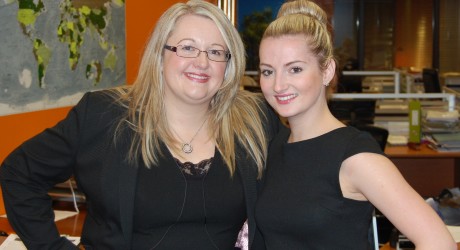 WITH Christmas just around the corner, many people will be stressed about fitting in last-minute shopping for presents around their busy work schedules, but one employee from a leading North-east recruitment agency has had a lot more to think about in the run-up to the festive season.

Genesis Personnel senior recruitment consultant, Steph Bruce, who is based at the company’s Peterhead office, is currently starring in Inverurie Panto’s production of Sleeping Beauty and has spent two months juggling her hectic work schedule around learning her lines and taking part in rehearsals.

Steph, 25, from Peterhead, said: “It has been a lot of work, but the long hours have been worth it when you see everything come together and you hear all the positive feedback.”

Steph, who joined the Genesis Personnel team in March, explained she has been performing in theatre productions for a number of years.

She said: “I started out when I was ten-years-old and latterly became involved with Aberdeen Youth Music Theatre and I performed in a couple of shows at HMT when I was with them.

“This is my fourth year appearing in an Inverurie Panto production. The first year was Dick Whittington, the following year it was Peter Pan, and then it was Aladdin. This year, I’m playing the Prince in Sleeping Beauty, so it’s very exciting.”

When Steph left school, she decided against pursuing a career in acting and opted to study at University in Aberdeen, graduating with a degree in Business Management with HR in 2009.

Steph said: “I performed at an Inverurie Talent Show the same year as Emeli Sande and often joke that she made it to the big time and I’m still treading the boards in Inverurie.

“I would have loved to have been a full time performer but I feel that I’ve got the best of both worlds. I get to do a job I love here at Genesis Personnel and I still get to take part in shows. I absolutely love meeting candidates and chatting to people. My colleagues are fantastic and very understanding about my hobby.”

Genesis Personnel managing director, Wendy Marr, added: “Steph has been a total breath of fresh air for our company.  From day one she has made an outstanding contribution to our business and has a tremendous energy about her. She is hard working and really does put her life and soul into everything that she does – whether it’s her daytime job at Genesis Personnel or her theatre work.”

Genesis Personnel was launched in 1975 and provides onshore and offshore recruitment solutions to clients across the world in a range of sectors including marine, industrial, commercial, driving, legal and oil and gas. The firm has an international client base providing permanent, temporary and contract-based personnel.