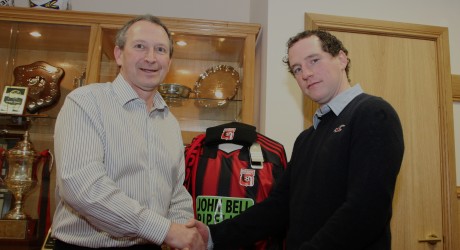 SATURDAY 22nd December was one lucky day for an employee at John Bell Pipeline, or rather it was for her partner!

Claire Heatherill has worked for the Inverurie-based company for more than seven years and has always supported the fact that her employer has been sponsors of both the Inverurie Loco Works FC as well as the Colony Park JFC for almost as long as she has worked there.

So much so that she encouraged her partner James Milne to join The Locos Lotto, a weekly prize draw which is a key fundraising activity of the football club as well as making an important contribution to the running of the Scottish Highland Football League club.

James had only been taking part in the lotto for a year when he won £500, his first win.

John Bell Pipeline has supported the Inverurie Loco Works FC since relocating from Aberdeen to Inverurie six years ago. With a number of staff coming from the Inverurie and surrounding areas and many of its customers being based in the North East, the company believe it is a good idea to support the local area football club.

Brian Thomson, managing director of John Bell Pipeline, commented: “The company is proud to continue supporting both the Inverurie Loco Works FC and the Colony Park JFC for the foreseeable future and hope all the teams involved at both clubs exceed their objectives in the coming years.”